March 08, 2021
comment
The city of Pismo Beach is putting a four-way stop at the intersection of James Way and Frances Way, where several residents say they’ve had close calls with cars while attempting to cross the 65-foot wide roadway. 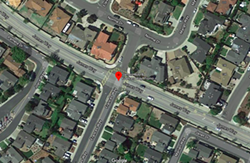 At a Traffic Safety Committee meeting on Feb. 11, several residents complained about the intersection, which they said is confusing and dangerous for both drivers and pedestrians. While there are already stop signs on Frances Way, there aren’t any stopping the flow of traffic on James, which is often host to dense and speedy traffic during busy travel times.

That makes it difficult to use the designated crosswalks leading across James Way, which Pismo Beach city staff say families and children often use to get to a nearby church and school.

Pismo Beach resident Summer Barnett wrote in an email to the City Council that her family uses the crosswalks at the intersection of James and Frances to get to a nearby pharmacy. It’s hard for drivers to see pedestrians when they first start crossing, and cars often don’t stop for her while she’s making her way over the road. Barnett said she doesn’t feel comfortable taking her daughter to cross that street during busy travel times.

“I’m sure some older children walk there without parents and need to cross,” she wrote, “and I am so concerned a tragedy will at some point occur at this intersection if a stop sign on James Way is not installed.”

A traffic study conducted at the intersection after the Feb. 11 Traffic Safety Committee meeting determined that the roadway is eligible for traffic calming stop signs. Pismo Beach City Council unanimously approved the installation of stop signs on James Way at a meeting on March 2.

“It is nice when government works and works efficiently,” City Manager Jim Lewis said at the meeting. “So we’re pleased that we could work on that for that neighborhood.” ∆