March 25, 2021
comment
Santa Maria City Council voted to continue a proposed ordinance that will regulate mobile car washers, but some of those affected aren’t happy about it. 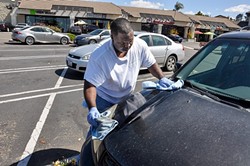 “The city wants to help mobile commercial car washes to prosper, with reasonable regulations for safety, fairness, and to protect the environment from uncontained wastewater discharged onto the street,” van de Kamp said. “The city is not trying to put anybody out of business. The goal is to have mobile commercial washers return to being mobile, not stationary on a street, which is what drives many of the complaints we receive.”

The ordinance was first brought before the council last summer, City Attorney Thomas Watson said at the March 16 council meeting, after the Regional Water Quality Control Board reached out to the city with concerns about the stormwater impacts of mobile car washes. The issue, Watson said, arose because some of the city’s mobile car wash operations have become effectively stationary, causing much larger quantities of wastewater to drain on public streets.

“But due to COVID and the impacts on the economy, as well as a request from council to do outreach to both the brick-and-mortar car washes as well as to the mobile car washes, there was some time lag to bringing [the ordinance] back,” Watson said.

The city’s code enforcement staff conducted outreach with about 40 mobile car wash operations, which Code Enforcement Supervisor Joy Castaing said is roughly half of those operating in the city. She added that the city has received a variety of complaints about mobile car washers that operate in one location. Residents are concerned about loud music, cones in the street, extension cords running across streets, trash, and parking issues.

“Most of these issues could be eliminated by simply not setting up in one location,” Castaing said.

Watson said that when the city team was conducting outreach, it found 31 mobile car washers set up on Boone Street on one given day.

“While again, with COVID, we’ve been understanding, it is becoming detrimental to the community,” Watson said.

The ordinance will require that mobile car washers maintain proper equipment setups to contain and dispose of water; that they no longer operate on public property, meaning they must go to their customers’ homes to conduct their services; and that the operations be inspected every two years.

All mobile washers will also have to obtain a permit, Castaing said.

“I know that we are in the time of COVID and we need to do all that we can to support and protect small businesses, entrepreneurs, but when we’re talking about our storm drains being impacted and those pollutants going straight into creeks and oceans, that’s a concern of mine,” she said.

Councilmember Etta Waterfield voted in favor of the ordinance, but expressed some concerns about how it might impact the small business owners.

“I think what upsets me the most is you get one rotten peach that destroys the whole basket, and with the 30 that are stationary on Boone Street, and doing other things, is causing hardship for the ones that are doing it legally and that are being mobile,” Waterfield said.

The council ultimately motioned to continue the ordinance with the caveat that, if passed, it come back for review in six months to ensure that it is effective and not creating unforeseen hardships. Councilmember Michael Cordero was the only dissenting vote.

“Some people will go out of business,” Cordero said during discussion of the ordinance. “It’s going to be difficult and somewhat expensive for some of these people that are barely making it as it is.” Δ

Correction: A previous version of this article stated that the City Council passed the ordinance at its March 16 meeting. The council actually voted to continue the ordinance to a second reading on April 6, where it passed 3-2.