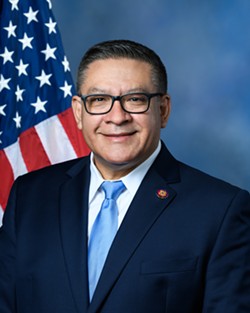 In 2019, Vandenberg Air Force Base was initially selected as a finalist for the U.S. Space Command Headquarters.

“The governors of Texas and Florida balked at that: Their areas were not included,” Carbajal said. “So there was a whole new process that ensued, and in 2020, there was a new list of finalists that were unveiled. Lo and behold, Vandenberg Air Force Base was removed from the list, and bases in Texas and Florida were added.”

Carbajal and Sen. Dianne Feinstein (D-California) sent requests to the department asking for transparency over the selection process, and now the Department of Defense Office of Inspector General is conducting a review of the decision.

The Space Force will soon embark on a selection process to pick a location for its new Space Training and Readiness Command (STARCOM). Carbajal, Feinstein, and Sen. Alex Padilla (D-California), want to ensure that the process is more transparent this time around.

The lawmakers penned a letter to Defense Secretary Lloyd Austin earlier this month requesting that the basing decision process for STARCOM be more clear, and urged the department to consider Vandenberg Air Force Base for the headquarters.

“We believe that Vandenberg AFB will be a top-tier candidate due to its existing training assets, including the 533d Training Squadron,” the letter said. “We look forward to learning more about the methodology that will be used in this basing decision and respectfully request that you give Vandenberg AFB all due consideration during the evaluation process.”

Carbajal said the search for STARCOM’s headquarters is expected to kick off in the near future, though he wasn’t aware of an exact timeline.

“We want to get ahead of the process by putting them on notice that Vandenberg is uniquely and exceptionally situated and qualified for the STAR Command that will be based in the United States,” Carbajal said.

One of those unique qualifications is that Vandenberg hosts the 533d Training Squadron, which already trains Air Force and Space Force personnel in space systems.

“We think Vandenberg Air Force Base is absolutely, perfectly equipped as probably the best candidate to be considered when they decide to move forward with this strategic process,” Carbajal said.

He added that if STARCOM headquarters were on the base, the local community would benefit from the new jobs and people it brings to the area. Δ