May 07, 2021
3 comments
A new bill could help local cities launch and operate safe parking programs for the homeless, programs similar to those that have popped up throughout San Luis Obispo County since the pandemic’s start.

At a press conference in Santa Barbara on May 3, U.S. Rep. Salud Carbajal (D-Santa Barbara) introduced the Naomi Schwartz Safe Parking Program Act, which, if passed, would establish a grant program that cities and counties could utilize for safe parking programs. 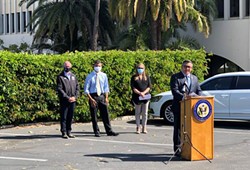 “I’m proud to bring this successful Central Coast program into the national spotlight and help it expand to places across the country,” Carbajal said at the press conference. “I will be fighting for better resources and legislation that tackle homelessness and create more affordable housing and opportunities so every American has access to a safe place to call home.”

Safe parking programs are gaining popularity throughout the U.S. as a simple and relatively low cost way to provide at least some services to individuals experiencing homelessness. Sleeping in a car is illegal on most city streets, and through these programs, homeless people living out of cars or RVs can park safely in a designated area overnight, allowing them to get sleep without having to worry about visits from law enforcement or complaints from neighbors.

Through the Naomi Schwartz Safe Parking Program Act, local governments nationwide would be able to apply for up to $5 million in five-year grants through the Department of Housing and Urban Development (HUD) to develop or run programs similar to Santa Barbara’s. The grants, according to Carbajal, could be used for establishing and operating parking programs, providing permanent housing assistance to program users, establishing and maintaining restrooms and showers for attendees, entering data into HUD’s Homeless Management Information System, and maintaining the vehicles of program users.

The 5Cities Homeless Coalition, for example, piloted a kind of safe parking program when Gov. Gavin Newsom issued the COVID-19 stay-at-home order last spring. Through the program, a handful of South County residents living in their cars parked at the Coastal Dunes RV Park and Campground, which was temporarily closed to campers and where 5Cities Homeless Coalition provided case management services. In just two months, Nichols said her organization housed seven families through the parking program.

But the program ended shortly after that when Coastal Dunes reopened to campers.

“Once the shelter-at-home order was lifted,” Nichols said, “that site was no longer available to us for the program, and we were unable to identify another location.”

The Community Action Partnership of SLO County (CAPSLO) recently opened a safe parking program in a 20-space lot next to the SLO Railroad Museum. Although the lot is equipped with a porta-potty, hand-washing station, and trash disposal, the program has had little participation since it opened on March 16, a contrast to similar programs operated by SLO County early on in the pandemic that saw consistent and significant turn out.

Tim Waag is a volunteer with Hope’s Village of SLO, an organization that offers various homeless services. Waag said he thinks SLO County’s early safe parking success was the result of lax rules regarding entry to the program. Attendees didn’t have to sign up for case management services or stay on site through the night like in some other safe parking programs.

“I am in favor of this initiative, as I am sure there are many municipalities similar to Santa Barbara’s that will make this proposed safe parking grant program a success,” Waag wrote in an email to New Times. “I’m afraid that if we stay on our current path, we will not be one of them. So sad.” ∆