May 20, 2021
comment
CommUnify, formerly known as the Community Action Commission of Santa Barbara County, will be discontinuing its Senior Nutrition Program after nearly 50 years of serving Santa Barbara County—unless the organization can secure more funding. 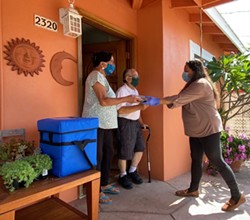 During public comment at the May 18 Santa Barbara County Board of Supervisors meeting, CommUnify CEO Patricia Keelean said that the program is no longer financially sustainable after a year of record-breaking need.

“During the pandemic, demand for meals has more than doubled,” she said. “In April alone, we provided more than 17,000 meals to over 720 seniors.”

But the financial challenges began long before the pandemic started. Over the past 10 years, the program has operated at a deficit, Keelean said, and the expense of providing services has only increased as the minimum wage, transportation costs, and food prices have all gone up.

“For that reason, CommUnify’s board of directors voted unanimously on May 5 to discontinue the Senior Nutrition Program, effective June 30,” Keelean told the board. “This is a very painful decision after 47 years of dedicated service to the seniors of Santa Barbara County.”

The only way the program could continue to operate in the long term, Keelean said, is with a secure, annual funding source. She made a plea to the Board of Supervisors to consider providing that money from the county level.

“In order to continue providing nutritious meals to seniors today, we must have a commitment for an additional $600,000 to $700,000 in permanent funding on an annual basis,” Keelean said. “Even at this amount, CommUnify will still be committing to fundraise roughly half a million dollars annually to break even.”

The Board of Supervisors allocated $77,000 to CommUnify earlier this year, which Keelean said allowed the organization to serve an additional 114 seniors in February and March. But it’s not enough to sustain the decades-old program much longer.

Keelean told New Times that simply being funded for one additional year would be helpful if an annual line item in the budget isn’t possible for the county.

“I would hope that at a minimum, that there could be some gap funding that would allow us to continue to provide the services through June 30 of next year,” she said. “In between, we could begin a community conversation around the issue of food insecurity for our seniors.”

Keelean said that a solution to the issue requires more than just local support.

“On a national level, the Older Americans Act is not adequately funded to support meal services or other services for our seniors,” she said. “I think there needs to be a multi-level advocacy effort to educate Congress about the growing needs among our senior population.”

Locally, Keelean asks that community members reach out to the Board of Supervisors to advocate for funding allocations for the Senior Nutrition Program. As of May 19, Keelean said she hadn’t heard from any board members about her plea for funding.

“When those funds for additional meals go away, then what’s going to happen is that whoever is the provider for this program, whether it’s us or another organization, are going to have to make very difficult decisions about who’s going to receive meals and who is not,” she said. “It’s imperative that we start to come together as a community and have a conversation about the needs of seniors.” Δ