May 21, 2021
comment
Grover Beach resident Angela Henderson heard about the nationwide rise in thefts of catalytic converters last month almost immediately after she bought a Toyota Prius, the most common target of such crimes. 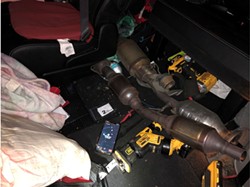 She heard about it on the news, from local police, and then her neighbors started posting about it on Nextdoor constantly, many saying they’d been hit overnight and detailing the thousands of dollars required to replace their stolen parts.

“It’s not a small thing,” Henderson said. “It could total your car.”

Henderson got so freaked out that she eventually paid around $200 to have a protective plate installed over her car’s catalytic converter. Then she launched an online survey aimed at finding trends among the thefts in Five Cities. If there’s a specific time or day when catalytic converter thefts are most common, Henderson hopes she can at least warn her neighbors to be on their guard.

“Well the police just sort of tell us what’s happening after the fact,” she said. “What I’m trying to see is patterns.”

In mid-March, the San Luis Obispo Police Department announced that citizens had reported 73 stolen converters since Jan. 1, or almost one per day. Ten were stolen in a single weekend in late April, all swiped from Priuses.

According to national news reports, catalytic converter theft is surging due to the part's high-valued precious metals, like palladium and rhodium. The global push to lower vehicle emissions—which catalytic converters help do—is also driving up their value to record levels.

Converters are an easy target for theft due to their exposed location under vehicles, and police say thieves are using hand tools like reciprocating saws to quickly remove the part.

Henderson’s survey can be completed online and includes just five questions. She hasn’t received many responses so far, but she’s hoping to get a clearer picture of the problem as more people find out about the survey.

“South Grover seems to be hit the hardest. But they’re coming into north Grover now too,” she said. “It’s disturbing.” ∆