May 24, 2021
comment
The California Department of Fish and Wildlife is ending the Dungeness crab fishing season early on June 1 because of an increase in humpback whales in the Pacific Ocean. 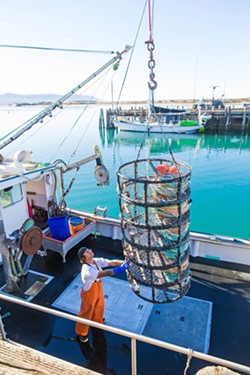 On May 18, Charlton Bonham, director of the state agency, announced that recent survey data indicated an increase in humpback whales returning from their winter breeding grounds to California fishing grounds.

In a press release, Bonham said that considering the data and recommendations from the Dungeness Crab Fishing Gear Working Group and other stakeholders, he assessed the entanglement risk under the Risk Assessment Mitigation Program (RAMP) and announced the early closure of the commercial Dungeness crab fishery.

All commercial crab traps must be removed from the fishing grounds by noon on June 1.

“It has been a very difficult year for many in our fishing communities and I recognize that every day of lost fishing further impacts families and small businesses,” Bonham said. “I acknowledge the sacrifices and resilience of California’s fishermen and women and look forward to continuing to work with the fleet and the Dungeness Crab Fishing Gear Working Group to minimize entanglement risk while maximizing opportunities.”

RAMP regulations were designed by the working group and stakeholders to minimize entanglement risk and provide for a long-term viable commercial fishing industry.

Bonham also authorized the lost and abandoned gear program, which removes traps left in the water, to begin its work on June 7 at 6 a.m.

Geoff Shester—a campaign director and senior scientist for Oceana, a nonprofit ocean conservation organization and member of the Dungeness Crab Fishing Gear Working Group—released a statement on the closure.

“The new system of time and area closures is working; there have been no confirmed whale or sea turtle entanglements in California commercial Dungeness crab gear this season. We commend the Department of Fish and Wildlife for collecting and acting on real-time data showing when and where whales have returned to feed. We hope to see this successful science-based approach continue to allow fishing when the risk of entanglements is low and encourage further development of pop-up gear innovations to allow additional fishing opportunities. Thanks to strong science and collaborative innovation, we’re keeping our coasts safer for whales and sea turtles while still maintaining one of California’s most valuable fisheries,” Shester said. ∆