June 02, 2021
2 comments
Camp Roberts is no longer being considered as a location to temporarily house unaccompanied migrant children. 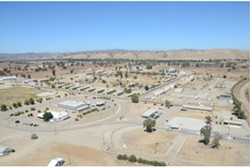 A spokesperson from the U.S. Rep. Salud Carbajal’s office (D-Santa Barbara) said the Department of Health and Human Services (HHS) informed the office that it doesn’t plan to use Camp Roberts due to a decrease in the number of unaccompanied minors crossing the U.S. border.

The spokesperson told New Times that there are significantly fewer unaccompanied minors being apprehended and placed in HHS custody, so there is less need for additional facilities to house them.

According to the HHS daily report, as of June 2, 439 unaccompanied children were in U.S. Customs and Border Patrol custody. The numbers have dropped from April, when 5,000 unaccompanied minors were in custody.

The #NotCampRoberts Coalition, which recently formed in opposition to using the facility as a temporary housing center, said it is relieved to hear the news that children won’t be housed at Camp Roberts.

“It has always been the Coalition’s intention to advocate in the best interests of the children. We recognize the challenges that the Biden administration faces as they move forward in their efforts to respond to this humanitarian crisis,” the coalition said in a statement. “The Coalition will continue to work toward comprehensive immigration reform that will include providing safe temporary housing for asylum seekers and advocating for children to be united with family or sponsors as soon as possible.” ∆