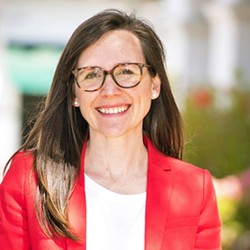 On May 4, Newsom’s press office announced Harmon’s appointment to the Coastal Commission, a decision that came after Harmon was nominated for the position by groups of elected officials in San Luis Obispo, Santa Barbara, and Ventura counties.

“I want to congratulate Commissioner Meagan Harmon on her new role,” Grover Beach Mayor Jeff Lee wrote in a statement to New Times. “I feel that she has an understanding of local issues important to Grover Beach, such as the Oceano Dunes and Diablo Canyon closures. Regarding the dunes, we look forward to working with her, Coastal staff, State Parks and the entire Commission to ensure that the beach is available for the safe enjoyment by residents and visitors to Grover Beach.”

Harmon is a Lompoc native, a Democrat, and has served on the Santa Barbara City Council since February 2019. She’s been a real estate law associate for years, and she works with the California League of Cities, where she serves as the first vice president of the Channel Cities Division and as a member of the Housing Community and Economic Development Policy Committee.

"As a real estate and land-use lawyer, I do understand how challenging it can be to work at the intersection of the Coastal Act and private property rights, and I understand how important it is that we're sensitive to both," Harmon said at a SLO County Board of Supervisors meeting on March 16. "I love our coast. I'm committed to protecting it, but it's also vital that we move beyond entrenchment to all the problems of our time. I wrote about this in my letter, but issues like affordable housing, like job creation, these are connected to the Coastal Commission."

In 2014, former Gov. Jerry Brown appointed former Pismo Beach City Councilmember Erik Howell to the commission to represent the South Central Coast, which consists of SLO, Santa Barbara, and Ventura counties. Howell served on the Coastal Commission until he lost his bid for reelection to the Pismo Beach City Council in November 2020, leaving the South Central Coast seat up for grabs.

Harmon was chosen for the position out of several other nominees, including Morro Bay Mayor John Headding and Santa Barbara County 1st District Supervisor Das Williams. ∆