July 13, 2021
comment
The San Luis Obispo County Board of Supervisors is kicking off its once-a-decade redistricting process with a public hearing on July 20.

Residents will have their first chance to weigh in on the redrawing of five supervisorial districts by attending the 1:30 p.m. meeting at the county government center or submitting a comment or map at slocounty.ca.gov/redistricting. 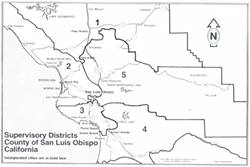 The hearing will “solicit ideas on how to adjust the district boundaries for electing the Board of Supervisors for the next decade,” according to a county press release.

“Residents have the opportunity to provide input on what kind of boundaries should be drawn to best represent their community,” it reads.

It’s the first of five hearings planned on redistricting between July 20 and Dec. 14, when the Board of Supervisors will adopt the final map, which lasts until 2031.

Earlier this year, supervisors opted not to form an independent redistricting commission for the task. They’ll instead rely on county staff and consultants to shepherd the process while making a final decision about the map.

The upcoming hearing will take place without access to 2020 Census data, which is delayed due to COVID-19 and won’t be available until September or October.

Census data is needed to draw accurate districts of equal populations, in compliance with the Voting Rights Act and other requirements.

Despite the lack of access to Census data, county officials are inviting residents to use an online mapping tool to submit proposed maps based on older data.