March 23, 2020
comment
After monitoring visitor use, The Land Conservancy of San Luis Obispo County announced on March 23 that it will close the Pismo Preserve until further notice. 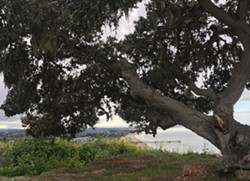 Executive Director Kaila Dettman told New Times that the conservancy has been tracking the executive orders, restrictions, and guidelines from local and state agencies due to the COVID-19 pandemic. With Gov. Gavin Newsom’s order that all individuals within the state shelter-at-home, a lot of residents are opting to spend more time outdoors. But even when people are outside, the California Department of Public Health, among other state agencies, recommends that individuals maintain social distance and stay at least 6 feet away from one another.

“The bottom line is it’s a really popular place. The single track trails in many locations are pretty narrow and it can be hard for people to pass each other without coming near each other,” she said.

That was one consideration that led to the organization’s determination to close the preserve.

The conservancy has been working with the city of Pismo Beach to monitor visitor use at the preserve, which opened to the public for the first time in January. Dettman said she drove through the parking lot of the Pismo Preserve a couple of times on March 22. It was packed.

“If it was light use, it would be pretty easy to justify [it being] low risk,” Dettman said.

She said there was a lot of congestion in the parking lot, people coming and going, and using the restroom facilities.

“Even though most people were trying to abide by social distancing, it’s hard to do,” she said.

Monitoring efforts also showed the conservancy who was visiting the preserve. They found that the preserve was a regional outdoor recreation area attracting people from all over the county. So the decision to close it was not made lightly, Dettman said, and the organization is very sad to shut down public access to the preserve.

“But believe that we have a responsibility to help slow or stop the spread [of COVID-19] so we’re trying to do our part to do that. The trails will be there when this all passes,” she said.

In the meantime, the conservancy still encourages people to get outside but do it near their own homes—a walk around the block or a bike ride through your neighborhood, for example.

Conservancy staff will continue to monitor news and recommendations regarding the virus closely and will reopen the Pismo Preserve when it is safe to do so, likely when the shelter-at-home orders are lifted. ∆
Prev
Next