March 25, 2020
comment
Four Santa Barbara County firefighters who responded to a medical emergency on March 24 are in quarantine after the woman they assisted began exhibiting symptoms in line with COVID-19 after she arrived at the hospital. 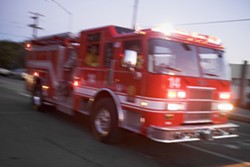 Bertucelli said he couldn’t identify which region of the county this event took place, as that’s information the county Public Health Department releases.
During a press conference on March 25, Public Health Department Director Van Do-Reynoso said the county had 26 positive cases of COVID-19. Six of the cases are in Santa Maria, five in Orcutt, 10 in Santa Barbara, and five are in smaller communities in South County. Of the 26 cases, six people have fully recovered, 19 are recovering at home, and one remains hospitalized.

Bertucelli said the department is taking extra steps during this pandemic to try and keep firefighters safe when responding to calls. First responders are wearing mouth and eye protection equipment when entering a home, as well as gowns if necessary.

Also, instead of all four firefighters who respond to medical emergencies entering the home at once, a single paramedic contacts the patient first until they feel it’s necessary for the others to join them. Bertucelli said the incident on March 24 took place outdoors, so all responders were in contact with the patient immediately.

In another incident involving county first responders, on March 17 the Santa Barbara County Sheriff’s Office announced 12 employees, including custody deputies and medical contractors, were directed to self-isolate in their homes after being around another employee who later tested positive for COVID-19.

During a press conference on March 24, Santa Barbara County Sheriff Bill Brown announced numerous ways his office is trying to limit the spread of the virus through the county jail, including releasing some low-level offenders up to 30 days earlier than their release date. So far, he said, his office has lowered the jail population by about 3 to 4 percent.

“We have taken meaningful and significant steps to reduce our jailhouse population and to keep the virus out of our jail,” Brown said. ∆
Prev
Next