March 31, 2020
comment
For many restless Californians living under Gov. Gavin Newsom’s stay-at-home order, the only chance to leave the house is to grab groceries or escape to a park. But this influx of outdoor adventurers is making it harder for people to abide by the social distancing guidelines that are in place to limit the spread of COVID-19.

This increase in park attendance led to beach and trail closures in Los Angeles County. On the Central Coast, San Luis Obispo County closed a regional park and campgrounds, as well as parking lots for all coastal county parks. Meanwhile, California State Parks announced on March 29 that vehicle access is now prohibited at all 280 state parks, including at the Oceano Dunes State Vehicular Recreation Area. 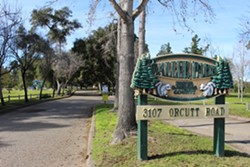 “On [March 28], many state parks once again experienced visitation surges that made it impossible for the public to implement appropriate social/physical distancing practices,” the announcement from California State Parks states.

But rather than close its parks, the city of Santa Maria is trying to expand the number of people its largest park can accommodate. On March 31, the city announced it’s temporarily waiving the entrance fee for Los Flores Ranch Park, and extending the days it’s open. Under these new hours, the park will be open from 8 a.m. to 7 p.m., Wednesday through Sunday.

“This is in an effort to meet the community’s increased need for access to local open space, trails, and parks,” the city’s announcement states.

For Santa Barbara County, it’s not quite business as usual, but it’s close. County Parks Superintendent Jeff Lindgren said the campgrounds at Cachuma Lake and Jalama Beach are closed, as well as all playground equipment, but that all parks remain open for daily use.

“At this point we are not planning on closing, and we hope that everyone will enjoy the parks, get outside, but continue to practice all the guidelines that have been laid out for all of us,” Lindgren said.

So far, he said, his department has been pleasantly surprised by how well most people are abiding by social distancing guidelines and staying at least 6 feet away from other people, despite increases in visitors at most parks. Staff members in his department have posted guidelines from the Centers for Disease Control and Prevention at facilities and are actively encouraging visitors to listen to these measures.

Lindgren acknowledged these guidelines are harder to follow on narrow trails, but said hikers could pull over to the side of a path and make space for other people to pass. He suggested hikers could also announce their presence when coming up on a hill or rounding a blind turn, so they don’t run into other people.

Although they’re open now, as the pandemic rolls on, if people stop following social distancing guidelines, the county could consider closing its parks. Which, Lindgren said, would only cause more frustration at an already stressful time.

“We can close a gate, but that doesn’t stop you from going [on a trail],” Lindgren said. “So if we get to that point, we would create a lot of frustration. As long as people are abiding by the guidelines, we don’t need to take those sorts of measures at this time.” ∆