April 17, 2020
1 comment
As the federal government pours more money into unemployment insurance programs and sends $1,200 checks to millions of Americans for assistance during the COVID-19 pandemic, there are thousands of Central Coast residents who won’t receive any of this help. 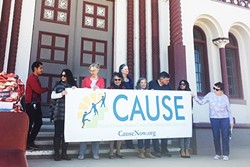 Undocumented workers aren’t eligible to receive this sort of assistance, despite dealing with the same economic consequences of the virus, such as job losses or hour reductions, as the rest of Californians. In an attempt to bring some relief to this population, Gov. Gavin Newsom announced on April 15 that the state is providing $75 million in disaster relief to these workers.

“California is the most diverse state in the nation,” Newsom said in a news release. “Our diversity makes us stronger and more resilient. Every Californian, including our undocumented neighbors and friends, should know that California is here to support them during this crisis. We are all in this together.”

According to the news release, about 150,000 undocumented adults in the state will receive $500 through this funding. Philanthropic partners are also pitching in an additional $50 million to provide further assistance. Regional nonprofits that serve undocumented communities will distribute this funding.
Abraham Melendrez, a policy advocate with the Central Coast Alliance United for a Sustainable Economy (CAUSE) said while this assistance will help some families out of work, more help is needed.

“In part, we’re really glad that our governor decided to step up to provide relief for immigrant workers, given our state depends so much on these undocumented workers,” Melendrez said. “But there’s a lot more that needs to be done to help our families.”

There are more than a million undocumented workers in the state, so not everybody who is eligible for it will receive funding, Melendrez said. Also, for the people who do receive money, $500 doesn’t go far for an adult who is completely out of work and isn’t eligible for any other government assistance.

A more sustainable approach would be to provide unemployment insurance benefits to undocumented workers, Melendrez said. This move would extend a safety net to undocumented workers who reportedly pay billions of dollars in taxes. According to a 2017 analysis from the Institute on Taxation and Economic Policy, undocumented Californians pay an estimated $3 billion in state and local taxes.

Although the ongoing COVID-19 crisis has highlighted the need for this change, this was an existing problem before the virus and will remain a problem afterward.

Melendrez said many of the undocumented workers in the county, and throughout the state, are employed in the agriculture industry, which is seasonal. This means many are out of work during the winter until the farming season starts again. Providing these workers with the opportunity to apply for unemployment insurance would ensure that they have the same protections as other Californians.

“It’s making sure there’s justice for all the workers and not just a privileged few,” Melendrez said.
Prev
Next