Responding to a petition that made the case for the mountain lion’s threatened status across six coastal regions from Santa Cruz to San Diego, the commission agreed on April 16 via a teleconference meeting to move ahead with a state-led review of the animals’ status. 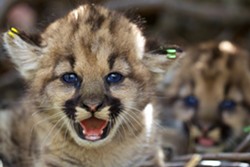 The overriding threat to the mountain lion population—which is estimated at between 225 and 510 cats in the region—is geographic and genetic isolation caused by human development, the petition argues.

“While Southern California and Central Coast mountain lions face a multitude of threats, the greatest challenges stem from habitat loss and fragmentation and the consequent impact on their genetic health,” states the petition, which was co-authored by the Center for Biological Diversity and the Mountain Lion Foundation.

The petition earned the support of 89 environmental organizations, including the Santa Barbara-based Los Padres Forestwatch.

“We were very supportive of the decision,” Los Padres Forestwatch Conservation Director Bryant Baker told New Times on April 22. “I think there’s a lot of good evidence that these populations are suffering from genetic isolation, and a listing certainly seems to be warranted and would go a long way in helping these populations recover.”

While habitat loss due to development is not as big a threat in a less populated San Luis Obispo County, Baker said there are many other reasons to be concerned about the local populations, from permitted killings of lions to rodenticide poisoning.

According to Baker, SLO County ranks sixth in the state in mountain lion killings (80) that were authorized by depredation permits since 2001. Those permits, issued to landowners as a measure to protect their livestock, are most commonly issued in more remote counties near the Sierra Nevada mountains.

“SLO seems to be a standout in terms of the Central Coast and much of Southern California,” Baker said.

During the state’s upcoming review, mountain lions will enjoy protected status. Depredation permits would be heavily scaled back, if not eliminated altogether. Other protections include requiring new development to consider their impacts to mountain lions and their habitat.

The California Farm Bureau and Cattlemen’s Association both opposed the commission’s decision.

In response to a request for comment, SLO County Farm Bureau Executive Director Brent Burchett said that he hopes the state will clarify how the decision “affects existing law and the depredation permitting process.”

“No one wants to see these animals killed, and we know the important role mountain lions play in our Central Coast ecosystem,” Burchett said. “But for a family cattle ranch, even the loss of a few head of cattle from predation has a serious financial impact.” ∆
Prev
Next