April 28, 2020
comment
If you want to fish in SLO County during the COVID-19 pandemic, you better live in SLO County. Well, kind of.

After a nearly four-week closure, a few of SLO County’s most popular boat ramps are open for business and ready to launch recreational fishermen into the big blue—a privilege that officials say could be nixed again if stringent social distancing guidelines, some that include SLO County residency, at the ramps aren’t followed. 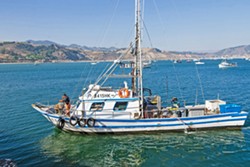 On April 22, the Morro Bay Harbor Department reopened its public boat launch ramp to recreational fishermen and released a list of rules that anyone hoping to use the ramp will have to follow for the duration of the COVID-19 pandemic, including a requirement that all potential customers live in SLO County.

Social distancing and face masks are required, the fish and boat cleaning stations are closed, and Morro Bay Harbor Department staff are checking for identification and boat registration at the ramp to ensure boaters aren’t tourists.

“In order for the launch ramp to remain open,” the Morro Bay Harbor Department release reads, “we must adhere to the state and county shelter-at-home orders, which specify recreating in your own neighborhood and limiting discretionary travel.”

Although the document checks take additional staff time, Morro Bay Harbor Patrol Supervisor Becka Kelly said the locals-only measure is helping to keep crowds at the ramp under control and limit potential exposure to COVID-19. Since the ramp opened on April 22, Kelly said staff have launched about half as many boats as they usually would this time of year, and few tourists have attempted to sneak by.

“If the public continues to follow directions as they have this past weekend with the launch ramp, I would say this trial period is going well,” Kelly wrote in an email to New Times. “We are concerned with citizens trying to find loopholes with residency and need to remind everyone to be patient with this process. We would hate to have to close it down completely again, but will if there are too many issues.”

The Port San Luis SportLaunch opened a few days after Morro Bay on April 24 under a similar set of protective guidelines. But staff at the SportLaunch won’t be checking IDs, according to Port San Luis Harbor Manager Andrea Lueker.

Although Lueker said the SportLaunch and Port San Luis Harbor District are encouraging tourists to stay home and adhere to the statewide stay-at-home order, there were concerns about the additional physical contact that would be required if SportLaunch staff were forced to ask every customer for identification and documentation.

Instead, the SportLaunch is accepting only 30 boats a day, and staff and customers alike are required to wear masks and adhere to strict social distancing guidelines.

SLO County’s public boat ramps closed toward the end of March in an effort to adhere to state and county stay-at-home orders. But after SLO County health officials discussed the possibility of relaxing closures at a press briefing on April 20, the county released additional “guidance” on specific activities allowed under the shelter-at-home orders later that day. The guidelines stated that things like construction, dog grooming, and recreational fishing could operate.

“It seemed like something we wanted to give a try,” Lueker told New Times, “and so far people seem to be doing a really good job at adhering to what we’re asking them to do.” ∆