April 29, 2020
2 comments
A “Reopen California Now” rally is being planned in Santa Maria for May 2, according to multiple Facebook posts made by local residents promoting the event. 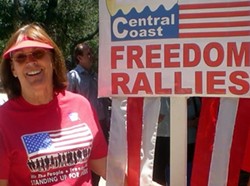 Dubbed the “Santa Maria Freedom Rally” by rally organizers, the event is being advertised as part of a larger, statewide movement to protest Gov. Gavin Newsom’s stay-at-home orders and the closure of nonessential businesses in response to the COVID-19 pandemic. Santa Maria currently has the second highest number of cases in the county at 130, second to Lompoc due to the outbreak in the federal penitentiary. Santa Barbara County officials announced the eighth death from COVID-19 in Santa Barbara County on April 29. The individual resided in Santa Maria.

An April 28 post by Maria Ornelas promotes the Santa Maria rally, mentioning “Live Free Protest to Open CA” rallies planned in cities across the state for May 2, including Los Angeles, Sacramento, San Diego, Orange County, Ventura, and San Francisco. A similar rally is also planned in Paso Robles on May 1. As of April 29, 46,500 people have contracted COVID-19 across California and 1,887 people have died.

An April 28 Facebook post by Dianne Howes, who lives in Santa Maria according to her profile, also promotes the event, stating, “I just updated our FREEDOM RALLY sign for this coming Saturday’s ‘REOPEN CALIFORNIA NOW’ Rally.”

Comments responding to Howes’ post range in sentiment. Sherrie Goodrich wrote, “If businesses open on May 1st this will be a celebration on May 2nd,” while Sally Jeff wrote, “KEEP THIS IDIOCY IN ORCUTT!”

Santa Maria resident Louis Meza— who caught and survived COVID-19, while Melissa Meza, his wife, remains hospitalized recovering from the virus— said that he believes rally organizers are not taking the virus as seriously as they should be.

Meza said he understands the concerns that people have about the economy. He hasn’t been able to work his job as a chef at The Hitching Post in more than a month.

“I know everybody is worried about us getting back to work and everybody’s having a hard time. But to see what I’ve been through, I would not wish this on anybody,” Meza said. “I’ve gotten into it with people on Facebook, and I showed them a picture of my wife on all the machines and everything. I said, ‘How would you feel if this was your wife, your daughter, your son, or your mom?’... It’s not a joke.”

Melissa was just transferred back to Marian Regional Medical Center after spending weeks down in a Santa Monica hospital where she received a life saving treatment from an extracorporeal membrane oxygenation (ECMO) machine. She is 43 and had no pre-existing conditions prior to contracting COVID-19.

“She almost passed away three times during this whole ordeal,” Meza said. “If she hadn't been sent down to LA and put on that ECMO machine, she would have passed away.”

During an April 29 virtual press conference, Santa Barbara County Public Health Department Director Dr. Van Do-Reynoso addressed reports of planned rallies in the community, encouraging people to stay home and follow social distancing guidelines. Second District County Supervisor Gregg Hart stated that the county respects citizens’ right to protest, but said that if people do choose to protest, they must follow the governor’s distancing mandates while doing so. ∆
Prev
Next