Some retailers could begin reopening before Mother's Day

May 04, 2020
comment
For all those who were scrambling to buy a last minute Mother’s Day present, you may be in luck. Florists and other retailers may be opening in limited capacities by the end of the week. 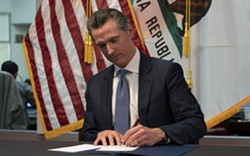 A few weeks after laying out a framework that Gov. Gavin Newsom said would guide the state’s approach to easing the existing stay-at-home order, the governor announced during his May 4 press conference that some retailers will be able to reopen on May 8.

“We are entering into the next phase this week,” Newsom said. “This is a very positive sign and it’s happened only for one reason: The data says it can happen.”

Newsom said that because the state is meeting its goals of containing the spread of COVID-19—such as stabilizing hospitalization rates and ramping up testing capabilities—specific retailers would be able to reopen with modifications like curbside pick-up. During the press conference, he pointed to stores that sell clothing, books, music, toys, flowers, and sporting goods as the first to reopen, but he said the state would release more specific guidelines on May 7.

The state is also providing some counties with the ability to move slightly ahead of the state in their reopening plans, he said, if they’re able to meet certain criteria related to testing, physical distancing, and other factors. These counties could move further into what Newsom calls “phase two” and open restaurants and other hospitality-related businesses.

During Santa Barbara County’s daily press conference on May 4, 2nd District Supervisor Gregg Hart said the county will work with the state to learn more about what exactly will be allowed to reopen and in what capacity, but overall, county officials are following the state’s lead. He said the county will also continue its own reopening planning efforts, while keeping up with the new timetable the governor announced.

“Santa Barbara County has been tracking indicators to meet the public health criteria the governor outlined for reopening our county back to business,” Hart said.

One of these indicators is the ability to conduct widespread testing. During the press conference, Santa Barbara County Public Health Director Van Do-Reynoso said the county’s first community testing site will open in Santa Maria on May 5 and other sites in Lompoc and Santa Barbara will open later in the week. To make an appointment at one of these locations visit lhi.care/covidtesting or call (888) 634-1123.

People who are tested at these sites will receive their results within two business days, Do-Reynoso said. Once the Public Health Department receives word that somebody tested positive, staff members will begin tracing where that individual has been and who they’ve been around to see if they’ve infected other people.

The state and the county are hiring additional staff members to ramp up these tracing efforts, which are key to containing the spread of the virus as businesses begin to reopen, officials said. ∆