May 06, 2020
comment
If a medical emergency arises, don’t delay seeking care because of COVID-19.

That’s one simple message that local hospitals want residents to hear, as emergency rooms across the U.S. see precipitous declines in patients amid the pandemic.

At local Dignity Health hospitals—French Hospital in San Luis Obispo, Arroyo Grande Hospital, and Marion Regional Medical Center in Santa Maria—ER visits are down by as much as 60 percent since the crisis started. 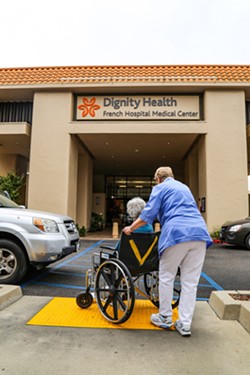 Sierra Vista Regional Medical Center in SLO and Twin Cities Hospital in Templeton have seen similar declines, according to physicians who’ve spoken publicly on the subject.

“Obviously with the shelter-at-home order, we know people aren’t traveling as many miles on the road, … so some of the ER visits related to motor vehicle accidents or other types of trauma, all that’s gone down significantly,” Dignity Health Central Coast Chief Medical Officer Scott Robertson told New Times. “But we’ve also seen the number of strokes patients go down, the number of patients with heart attacks, severe abdominal pains. Those can’t be explained by the COVID-19 pandemic.”

It’s not just the data that’s telling the story. Robertson said Dignity Health doctors have treated critical ill patients who’ve delayed seeking care because of the virus. In many cases, those delays complicated their illnesses.

“When you speak to someone who’s having chest pain for two weeks, you realize they’ve had a heart attack,” Robertson said. “They were fearful of coming into the hospital for a couple reasons. Some didn’t want to burden the health care providers. Some were obviously fearful of COVID-19.”

In an effort to reassure the community that their hospitals are safe to visit, on April 28, Dignity Health sent out a press release on the topic.

“Hospitals have taken extensive measures to separate potential coronavirus patients from all others,” the press release read. “Each emergency department has created separate patient treatment areas to reduce risk of exposure, while continuing to care for medical emergencies.”

Robertson said that right now, it is difficult to measure what the health impact has been of patients avoiding hospitals. But he noted “it’s a real phenomenon.”

“This stuff will be studied immensely over the next 24 months and we’ll have a clear picture of what happened during this kind of blackout,” Robertson said. “We feel it’s important to get the word out that our hospitals are some of the safest places to be.” ∆
Prev
Next