May 06, 2020
comment
Santa Barbara County’s first community based testing site opened in Santa Maria on May 5 and was fully booked on its first day, the county’s public health department reported. Located at the Santa Maria Fairpark, the site is open from 7 a.m. to 7 p.m. and has a 132 daily test capacity. 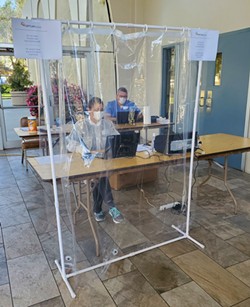 Santa Barbara Emergency Medical Services Agency Director Nick Clay told the Sun that the testing site is operated through a state contractor, with locations for testing sites determined by the state based on population and access to testing.

So far, Clay said there are 80 community based testing sites across California. The county expects to open two more sites at the Earl Warren Showgrounds in Santa Barbara and the Anderson Recreation Center in Lompoc later this week on Thursday and Friday, respectively.

The Sun spoke with Clay about halfway through the first day that Santa Maria’s testing site was open, and he said things were going well. Between the public health department, county staff, the emergency operations center, and the incident management team, Clay said the site was sufficiently staffed to ensure that everything ran smoothly.

The appointment website launched a few days prior to the site’s opening on May 1 after the county’s Joint Information Center first announced the new testing capabilities in an April 29 press release.

“This expanded COVID-19 testing option will be in Santa Barbara County for the next few months and possibly longer,” Santa Barbara County Public Health Director Van Do-Reynoso said in the release. “With additional testing, will also come expanded contact tracing and increased resources dedicated to safe quarantine and isolation housing, if needed.”

Every appointment on the first day was booked ahead of time as required by the testing site. Those interested in getting tested must request an appointment online at https://lhi.care/covidtesting or by calling (888) 634-1123.

Clay said he is confident that once all three of the sites are operational, any person in Santa Barbara County should have little trouble getting an appointment to be tested. Between the three locations, there will be at least one site open every day of the week.

“There is a prioritization process in which folks who are health care workers, first responders, folks who live or work in a congregate setting, those with symptoms, and those with symptoms over 65, are in a priority group,” Clay said. “So those individuals, when making an appointment, will be getting a first choice of appointment times. Those who don’t exhibit those symptoms or don’t meet that criteria will still be able to make an appointment, they just won’t be given priority times.”

Currently, the website to sign up for appointments— which is run by the state’s contractor— is only available in English, but Clay said Spanish translation is in the works. The phone line, however, is available in English and Spanish. The county is also working with a local partner to add Mixteco translation as soon as possible.

“It’s a little bit of a hurdle for us in terms of accessing the state’s phone and the state’s website, so we’re going to work with some community partners and make sure that they have access,” Clay said of the local Mixtec population. “This is a group that we certainly want to make sure to reach out to.”

After someone is tested at the community site, Clay said they can expect to get their results within 48 hours.

“Folks who are negative will get an automated message,” Clay said. “Those who are positive will get a call from the state’s clinician service, [letting] them know their results and answer any questions they may have. Subsequent to that, the Santa Barbara County Public Health Department disease control containment teams will be contact tracing to understand who they’ve talked to, where they’ve been, who they’ve been potentially exposed to.”

Clay said that county residents are allowed to get tested at any community testing site in the state. The test is free of charge, and people do not need to have insurance to get tested. People without proof of residency or without identification are also welcome to get tested. ∆
Prev
Next