May 08, 2020
comment
The Santa Barbara County Public Health Department announced on May 7 that some non-essential businesses in the county could reopen for business starting May 8, but must follow guidelines that include no in-store shopping. Businesses allowed to resume on a curbside pick-up basis include antique stores, book stores, clothing stores, florists, and other retailers. 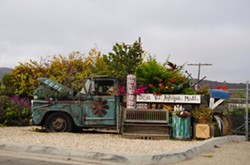 This comes after Gov. Gavin Newsom’s May 4 announcement that the state was now in “phase two” of the governor’s “resilience roadmap.”

But it appears some local businesses are attempting to take reopening matters into their own hands. Deja Vu Antique Mall, located in Old Town Orcutt, announced in a May 5 Facebook post that the store would be opening the next day for in-store shopping, two days before Newsom said non-essential businesses could open for curbside-only service.

“OK everybody I’m tired of being closed!,” the post reads. “Deja Vu is going to open starting tomorrow!”

“If properly worn masks and gloves are mandatory, count me in. If not, I'd have to pass. Can not risk it,” Sue Girard wrote.

Another commenter named Jan Strohmaier Campagne wrote, “And I am tired of having an autoimmune disease. What is wrong with you people?”

Owner of the shop Wendy Steller told the Sun that she plans to provide masks and hand sanitizer to all in-store customers, as well as enforcing 6-feet apart rules.

Raquel Zick, public information officer for the Santa Barbara County Sheriff's Department, told the Sun that generally they haven’t had trouble enforcing the rules for businesses.

“We’re going to remain consistent with the way that we’ve handled this so far,” Zick said. “One of the most effective things we’ve been doing is just letting businesses know the guidelines. Seeking voluntary cooperation has not been a huge hurdle for us thus far.”

Zick said that the Sheriff’s Office investigates reports that they receive, but they do not have the time to go business to business and check up on compliance.

Regarding the new reopening allowances, Zick emphasized that non-essential businesses on the list are only allowed to open with curbside pick-up, even if those businesses are following sanitation and social distancing guidelines inside their store.

Steller said that she believes she should be able to resume in-store operations because her store does not have high traffic.

“An antique store, a clothing store, a home decor store, they’re not like a Costco or a city bus or a Home Depot,” Steller said. “We don’t get hundreds of people walking through our door at a time. We get two or three, and we know our customers because we’re local. We communicate with them, and I think that’s the important thing. I think that we should be allowed to be open with our normal hours because of those reasons.”

“The building that our store calls home was sold without notice to a new owner at the end of April,” the post states. “This new owner wants the building emptied immediately in hope of pursuing a different business plan. He has served us notice of eviction, which gives us 90 days after the end of the county’s COVID-19 shelter-in-place order to vacate our store.”
Steller said that the impending closure of Old Towne Market was a large motivation for her decision to reopen Deja Vu.

“I needed something positive to happen in my life, and my customers are my positive,” she said. ∆