May 12, 2020
comment
Although it lands on a Saturday and is likely to be nice and warm, this coming Independence Day is shaping up to be a quiet one on the Central Coast. From Santa Maria to Cayucos, popular summer destinations and cities have cancelled their usual July 4 fireworks shows, which in some cases draw thousands of visitors and spectators.

In Pismo Beach, the Fourth of July typically brings in 70,000 to 100,000 visitors and pumps about $1 million into the local economy each year, according to Pismo Management Services Director Jorge Garcia. The fireworks show, which Garcia said Pismo has hosted since before the 1940s, is usually a big end-of-the-day highlight, drawing thousands to Pismo’s shores to watch explosions light up the sky and ocean below. 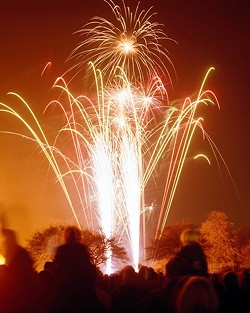 But this year, for the first time since WWII, that won’t happen. City staff announced the cancellation at a City Council meeting on May 5, and Garcia said the decision came down to coronavirus-related concerns.

“We don’t see it as a feasible option,” Garcia told New Times.

Although the state and county have plans to lift stay-at-home orders and slowly reopen over the next several months, large events likely won’t be allowed for some time, and Garcia said Pismo Beach couldn’t put on the fireworks show in accordance with current stay-at-home guidelines. The decision will save the city about $40,000 in fireworks costs, but Garcia said Pismo’s economy will likely see a lower than usual influx this Independence Day.

Although it isn’t clear what the world will look like in July, Garcia said Pismo still plans to keep its beaches open for residents to use in a responsible and safe way on July 4.

“We think coastal access is important,” Garcia said, “and as long as the beaches are utilized and physical distancing is in place, we want people to be able to enjoy the sun and get out.”

Santa Maria announced the cancellation of its Fourth of July show in a press release on May 12, citing the inability to raise the roughly $35,000 usually spent annually on fireworks.

Cayucos faced similar fundraising challenges this year, and the Cayucos Chamber of Commerce announced the cancellation of its decades-old July 4 fireworks show in a press release on May 7.

Cayucos chamber President Brendan Fritzsche said the chamber had to cancel its annual May Madness fundraising event, which typically cultivates the funds necessary to pay for the fireworks and other amenities—extra trash cans, porta potties, security, etc.—necessary in Cayucos on July 4.

But Fritzsche said the Chamber also felt it wouldn’t be able to host the event in accordance with the state’s stay-at-home order, even taking future openings into consideration.

“We really can’t be promoting activities when we don’t know what will be allowed,” he told New Times.

Still, the chamber is expecting to see an influx of visitors to Cayucos on the Fourth of July regardless of COVID-19, and Fritzsche said they’re working out a plan to ensure everyone’s safety. Without any big, city sanctioned fireworks shows on the Central Coast, Fritzsche said he worries there will be an uptick in illegal, personal firework use in SLO County.

“I think this year there’s going to be some people who feel strongly about wanting to have fireworks,” he said. “So I think we can expect that.” ∆
Prev
Next