May 19, 2020
comment
Starting at 5 p.m. on May 20, all employees at Pismo Beach businesses will be required to wear face coverings while in publicly accessible areas where appropriate physical distancing isn’t possible.

The new requirement is part of an urgency ordinance passed unanimously at a Pismo Beach City Council meeting on May 19, where council members agreed that with summer and hoards of visitors on the horizon, something needs to be done to protect Pismo Beach workers from COVID-19. 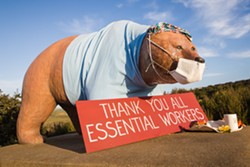 “I think this is the least invasive thing we could do to protect the employees,” Councilmember Marcia Guthrie said at the meeting. “And I think it’s the right thing to do.”

The approved ordinance is a modified version of a more stringent one initially proposed and voted down on May 5.

While the May 5 ordinance would have forced businesses to ensure both their workers and customers wear face coverings at all times, the approved ordinance only applies to businesses and their employees. Although businesses will be required to hang city-provided signs encouraging face coverings, only employees will have to wear coverings, and only while in publicly accessible spaces where maintaining six feet of distance isn’t possible.

Although Pismo Beach Mayor Ed Waage and Mary Ann Reiss opposed the May 5 ordinance because they said it would have left businesses with too much enforcement responsibility, both supported the modified May 19 ordinance.

Still, a number of Pismo Beach business owners and residents spoke out against the ordinance at the May 19 meeting. Several said the decision would be best left up to individual businesses, many of which are already facing a number of new laws and regulations related to COVID-19. Several, including the South County Chambers of Commerce, also took issue with the possibility of pinning administrative fines—starting at $100 for a first offense—on already struggling businesses.

Several community members opposed to the ordinance—including a group of nurses, doctors, and a member of the Central Coast Health Coalition who wrote to the city on May 18—also noted that the SLO County Public Health Department discourages such face covering requirements for the general public.

“The authors of this letter find there is insufficient medical evidence to support the mandatory use of facemasks by all individuals in hopes of preventing an overwhelm of COVID-19 cases,” the letter reads. “In fact, routine use of facemasks by the general public may cause negative health consequences.”

But a number of other community members wrote passionately in favor of face coverings, including some employees with concerns that their employers couldn’t be trusted to do what’s safest for everyone.

That extreme difference in public opinion, council members agreed, is why the city is stepping in.  ∆