May 28, 2020
comment
Wineries and wine tasting rooms in Santa Barbara County can begin reopening as long as they serve food or contract with a vendor that does, such as a restaurant or food truck. 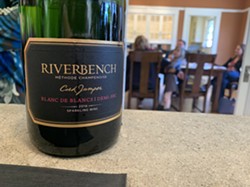 On May 25, County Executive Officer Mona Miyasato declared an emergency rule that temporarily suspends certain zoning regulations, permit restrictions, and development standards that prohibit or limit wineries and wine tasting rooms from serving food. This would allow the businesses to operate more like restaurants, which recently received approval to reopen in the county after being closed or limited to curbside service due to the COVID-19 pandemic.

The county’s announcement comes a few days after the state approved the county’s plans to move into the next phase of the state’s reopening plan. This transition allowed restaurants—along with retail stores and other businesses—to resume operations with some modifications.

This move forward didn’t include the reopening of wineries and wine tasting rooms, which are slated to reopen when the state moves into phase three of its plan. Gov. Gavin Newsom hasn’t announced when this transition will take place.

The county announced it was easing these regulations about a week after the May 19 Board of Supervisors meeting, during which some supervisors suggested the county should advocate for the state to allow wineries to reopen. Third District Supervisor Joan Hartmann, whose district includes the Santa Ynez Valley—where many of the county’s vineyards and wine tasting rooms are located—said she believes wineries could reopen while ensuring guests stay 6 feet apart.

“Most of the wine tasting rooms that I’m familiar with are just a few people visiting at a time, and it’s very easy to socially distance in that setting,” Hartmann said.

During the meeting, Santa Barbara County Vintners Association CEO Alison Laslett said the association is working with wine groups throughout the state to advocate for the reopening of wineries. She also asked the board to consider relaxing the county’s regulations on wineries serving food, so that they could have a path to reopening.

“It’s a cumbersome workaround for our industry, because we aren’t actually a food industry and it’s not our first choice, but it’s one that we could work with through contracting with food trucks or restaurants that might get some of us back in business,” Laslett said.

The association has a list of some of the wineries that have begun reopening under these temporarily suspended regulations on its website. ∆