June 04, 2020
2 comments
Amid the COVID-19 crisis and local protests over police racism and brutality, on June 2, the San Luis Obispo City Council passed a 2020-21 budget with $4.7 million in cuts due to coronavirus impacts, but with a boost in funding for diversity and inclusion efforts.

In a staff report, city officials detailed how “steep revenue declines” from COVID-19 resulted in $6.5 million in losses during the 2019-20 fiscal year and warned of future impacts. 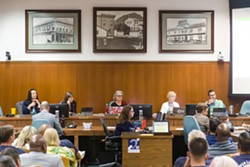 “Current assumptions carry revenue declines in 2020-21,” the report reads, “as governments begin to figure out the reopening of the economy while still being prepared for the continued or resurfacing pandemic.”

SLO’s budget cuts impact every department, with the police department getting the largest hit at about $1 million. The fire department has a $856,632 cut, and the community development department and public works department have a combined $1.2 million in cuts.

The city also laid off more than 200 seasonal workers and will launch a voluntary retirement program—offering retirement-age employees a $15,000 incentive bonus if they retire by June 26.

Despite its variety of cuts, the City Council also voted unanimously to allocate $160,000 to kickstart a task force that will tackle diversity and inclusion issues in the city.

In light of current events, council members said they wanted to prioritize and invest in these efforts, which SLO had only allocated $20,000 for in previous budgets.

At the start of the meeting, Stewart spoke about the ongoing protests throughout the country, sparked by the death of George Floyd, who stopped breathing while he was pinned to the ground by a Minneapolis police officer. She said the demonstrations both locally and beyond stem from “hundreds of years of pain.”

“I do see and hear the rage that comes from so many people,” Stewart said. “And many people don’t seem to understand that.”

Stewart and Mayor Heidi Harmon agreed to form an ad-hoc committee to help spearhead the creation of a new task force on local race relations. City leaders acknowledged that their previous efforts on the issue have failed to gain enough traction.

“We’ve had a struggle figuring out what’s meaningful and truly helpful in terms of this issue,” Harmon said.

At the suggestion of City Manager Derek Johnson, part of the funding will go toward hiring a professional facilitator to help lead the task force’s conversations.

“You need to have someone who’s skilled, knowledgeable, ready, and understands the landscape … so as we walk away from the task force, we have something really meaningful and actionable,” Johnson said. “If it’s not done right, we could go backwards.” ∆