June 05, 2020
comment
Calling for peaceful talking amid "picket lines and picket signs" instead of punishing with brutality, Marvin Gaye's words echoed throughout downtown San Luis Obispo on Thursday as protesters peacefully gathered for another rally and march against police violence and systemic racism. 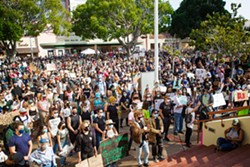 The San Luis Obispo County chapter of the NAACP, R.A.C.E. Matters SLO, and Cal Poly black faculty and staff jointly organized the rally, held at the county courthouse's footsteps on Monterey Street. The rally's theme was centered around the theme of #We Are Done Dying. Protests across the nation have propped up in the wake of George Floyd's death on May 25. The Minneapolis resident died after a police officer pinned him to the ground by kneeling on his neck and back.

Speakers urged police reform, justice for those killed, and peaceful protesting in front of a crowd that filled much of Monterey Street between Osos and Santa Rosa Streets.

"Running while black, sleeping while black, and a $20 counterfeit bill should not be a death sentence," Cheryl Vines, the SLO NAACP's secretary, said at the rally to crowd applause.

Tianna Arata, a recent Cuesta College graduate and one of the youth organizers, also spoke at the rally, saying that—while honored to have the platform to speak out on important issues—she felt "suffocated by the demands from her community" and that "it's a lot to handle."

"To white and non-black people: Please don't look to me for all the answers," Arata said to applause. "Use your resources. You know you have them. Don't act like you've never taken a class before."

NAACP chapter president Stephen Vines, the rally's last speaker of the evening, told rally attendees that monthly rallies would now take place in front of the courthouse, and he called for health care and prison reform.

After the rally's conclusion, many marched from the courthouse and worked their way through Chorro, Higuera, Carmel, Marsh, and Osos streets.

Marcher Emily Chapman of Atascadero said she was thrilled to see many young people at the rally and march. She said she felt compelled to attend and listen to black community members who have asked for support in combating police brutality.

Another protester said she was at the rally and marching for her two daughters in hopes of a better future.

"There's got to be a change in this country," said San Luis Obispo resident Valerie Hopple. "We've got to show them what needs to be done so that their generation, they don't have to keep fighting this fight."

Once they completed a lap, protesters formed an honor guard for the march's leaders, spanning two blocks of Osos Street between Monterey and Marsh, followed by an eight minute and 46 second moment of silence—the amount of time ex-officer Derek Chauvin pinned Floyd to the ground with his knee. Youth organizer and Cal Poly football quarterback Jalen Hamler said the honor guard was something he never imagined when he first arrived in San Luis Obispo.

"They blew my mind," Hamler said. "It's inspiration for me to keep going, to keep leading these people, so I'm going to do the best of my power—me and my organizing group, we're going to do what's best in our power to come out here and make the world a better place."

After the moment of silence, protesters continued their march before stopping at the intersection of Marsh and Broad to conclude the evening's activities.

San Luis Obispo Police Chief Deanna Cantrell tweeted her thanks on behalf of the city to "event organizers and participants for a successful rally and march.” And Hamler told the crowd that he hopes this march is not the last time he sees them.