June 05, 2020
comment
At 4:40 p.m. on June 4, the plaza outside Santa Maria City Hall starts filling with community members. A podium with a blue and yellow NAACP banner draped over the front sits adjacent to the plaza’s iconic mother and son statue. Someone stands near the entrance of the plaza, handing out schedules for today’s event: A social justice solidarity march and rally honoring the life of George Floyd, who died after Minneapolis police pinned him to the ground on May 25. 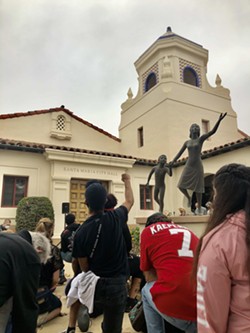 The rally is scheduled to begin at 5 p.m., but as the clock nears the top of the hour, the plaza is already full of people, some holding protest signs and nearly all wearing face masks. Rally attendees spill into the adjacent grassy area on the corner of South Broadway and West Cook streets, the same spot where unrest broke out days earlier.

A teacher joyfully reunites with a group of his middle school-aged students. He tells them, “Remember when I had you read Birmingham? … This is the real deal.”

Organized by the Santa Maria-Lompoc branch of the NAACP, the rally begins with a few words from the branch President Lawanda Lyons-Pruitt.

“On May 25, the whole world saw a lynching of George Floyd,” she says into a microphone. “It’s not lost on me that the very day that he was murdered, we were here—some of the citizens of the community Santa Maria—we were here in this very plaza. And we were here to honor the memory of Ahmad Arbery and Breonna Taylor. … We must protest peacefully, demand persistently, and fight politically. But most of all we must vote on Nov. 3.”

As the speeches conclude, community members move toward the sidewalks to walk a planned march route that, Lyon-Pruitt emphasizes, will follow all traffic laws.

Protestors move north down South Broadway, stretching all the way from city hall to East Main Street. As marchers reach the intersection, they cross to the other side of South Broadway and make their way back to city hall.

A handful of police officers control traffic as the masses abide by traffic laws and make their way through crosswalks, but the officers do not interact with the crowd.

As the march concludes, the plaza and surrounding open space outside city hall fills once again. The crowd kneels in silence for eight minutes and 46 seconds—the amount of time that Minneapolis police officer Derek Chauvin kneeled on George Floyd’s neck and back. A young man who led chants during the march raises his fist to a clouded sky. ∆