June 08, 2020
comment
On June 3, several businesses in downtown San Luis Obispo boarded up their windows and closed in anticipation of protests in the following days. One of those protests was hosted by the NAACP SLO County Branch, which released a statement on June 5 saying the businesses’ reaction was hurtful. 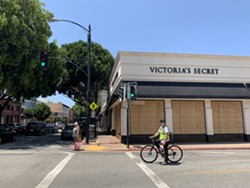 At the request of city staff, Downtown SLO sent a memo to its member business owners recommending precautionary measures including proactive closures, and the installation of alarm systems and security cameras.

According to city spokesperson James Blatter, the city wanted to give notice to business owners in the area of the large crowds that were expected to gather for the protests.

“To see the news of buildings being boarded up in anticipation of violent protests was hurtful. To see photos of self-appointed civilian protectors patrolling downtown was hurtful. To hear that a peaceful protester had some sort of altercation with a vehicle is heartbreaking. We know that these actions are not reflective of the city of San Luis Obispo and the San Luis Obispo community as a whole; we appreciate the continued support of individuals, organizers, municipalities, and businesses throughout our county. But when we see this kind of response to a peaceful exercise of First Amendment rights on behalf of racial justice, we know we still have a lot of work to do. This was an aggressive, automatic response; and it hurt, deeply,” NAACP SLO County’s statement read.

The local NAACP’s rally on June 4 focused on addressing violence, and branch President Stephen Vines said the rally was peaceful.

He told New Times that the key to keeping the rally peaceful was to send a positive message at the beginning and end of the event.

“We’re not about being mad about this because we’re glad there are martyrs to start this movement,” Vines said. “The dead can’t ask for justice. It’s up to us to get it. If we use violence then we’re worse than the oppressor.”

He said the people who are angry and just want to destroy stuff aren’t helping anyone. But, Vines said he’s focusing on keeping the positive momentum going and gearing it toward policy change.

“It’s not about just the police; it’s about bad policies that incite bad behavior,” he said.

The NAACP SLO County branch is planning to hold a rally on the first Thursday of every month until the November election. The branch is also working to establish a coordinating council to create workshops and other events in the community. ∆