June 17, 2020
comment
Chants from a rally outside of Santa Maria City Hall filtered through the livestream of the June 16 City Council meeting discussing the proposed 2020-22 budget.

Organized by the Santa Maria Youth Abolitionists, the protest called for defunding the Santa Maria Police Department "as we work as a community towards the end of policing,” according to an Instagram post by Lompoc Democrats promoting the rally. 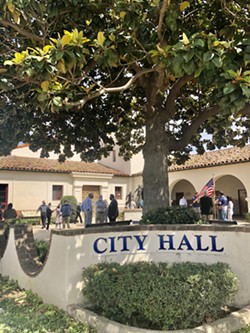 “I think what we’re seeing as we’re hearing demonstrators outside is them wanting to bring our attention to the fact that we are defunding our human infrastructure, as [former 2nd District Santa Barbara County] Supervisor Janet Wolf would say,” Councilmember Gloria Soto later said.

So far, the city has lost $3.8 million because of the pandemic, and could be facing more than $10 million in revenue losses over the next two years, City Manager Jason Stilwell said.

The primary way the city will mitigate these losses is by digging into reserves. But the budget also proposed cuts to the pool and library for 2020-21 to save money, as these facilities were expected to remain closed anyway due to COVID-19. These cuts would have forced the pool to remain closed until January 2021, and the library through September 2020. But with ever-changing reopening guidelines, some residents were frustrated that the pool and library might be financially unable to open, even after health guidelines allow it.

During public comment, community members spoke in support of reopening the Paul Nelson pool and the Santa Maria library, objected to how much of the budget is allocated toward public safety, and expressed concerns over large budgetary cuts in other areas.

According to a pie chart Stilwell presented, 63 percent of 2020-21 general fund appropriations go to public safety, while 20 percent is allocated to general government, 12 percent to leisure and cultural services, and 5 percent to community and economic development.

Soto pointed out that cuts to the proposed budget would impact the Mayor’s Task Force on Youth Safety. The year-end 2019-20 estimate for dollars spent on the task force comes to $48,412, but the proposed budget for 2020-21 would allocate just $11,214.

“As we are getting ready to approve, or as we talk about whether or not to approve tonight’s proposed budget, I really want us to consider the fact that we took $37,000 out of the Mayor’s Youth Task Force,” Soto said, emphasizing that the task force already received one of the smallest allocations of the budget before the cut.

Soto also brought up the results from a community survey she conducted.

Out of around 1,700 respondents, “70 percent of survey takers were adamant that community centers were important to them, including the library, community centers, and aquatics center,” Soto said.

Councilmember Etta Waterfield, who advocated strongly for reopening the pool as soon as possible, tossed around the idea of a 5 percent salary cut for city employees to try and close the gap in funding. She also inquired about using additional city reserves to address the pool and library closures, though Cordero objected to the idea.

Councilmember Michael Moats asked City Police Chief Phil Hansen to speak to the fact that the Santa Maria Police Department requested funds for body cameras, which were not reflected in the proposed budget.

“Body cameras are something that I believe are a public expectation at this point, and I think they would be good for us as a department. … It was determined that the money was not available to fulfill that request,” Hansen said. “I have hopes that, given the national dialogue that’s going on right now, there will be probably grant funding forthcoming from the federal government encouraging use of body cameras, and we can apply for that.”

City Manager Stilwell proposed using $558,000 from general capital funds to reopen the pool and library, when COVID-19 restrictions allow for it, as well as keep the task force funded.

With that, Waterfield made a motion to approve the budget with the option offered by Stilwell. The motion passed 4-1, with Soto voting no. Soto said she was uncomfortable voting yes without seeing the changes written into the budget, and without getting a chance to vote on the updated budget in a special meeting. ∆