June 23, 2020
16 comments
The SLO County Public Health Department is warning residents that various cards claiming to exempt the holder from California’s face covering ordinance are fraudulent and not endorsed by the U.S. Department of Justice. 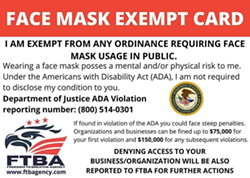 The card claims that wearing a face mask “posses” a mental or physical risk to the holder.

“Under the Americans with Disability Act (ADA) [sic], I am not required to disclose my condition to you,” the card reads. “If found in violation of the ADA you could face steep penalties. Organizations and businesses can be fined up to $75,000 for your first violation and $150,000 for any subsequent violations.”

The card also claims that any business or organization that denies access to a card holder because of a face covering rule will be reported to the "Freedom to Breathe Agency", a group that appears to have recently formed in opposition to COVID-19-related face covering requirements.

A number of other similar printouts and links to cards on the Freedom to Breathe Agency's website have also been shared in local Facebook groups.

Although the state issued an executive order requiring Californians to wear face coverings in public while physical distancing is not practical, SLO County spokesperson Michelle Shoresman said the focus is more on promoting compliance and less on enforcement. Businesses are allowed to deny access to individuals who refuse to wear a mask, but Shoresman said that unless a situation becomes disruptive, that will likely be the extent of the consequences.

Still, a number of individuals are exempt from wearing face coverings—young children, those with certain physical and mental health issues, some disabilities—and Shoresman said there is no official verification process or documentation for those individuals.

“We encourage residents and business owners to recognize and respect that some people are not able to wear a face covering for legitimate medical and mental health reasons, including reasons that are not readily visible,” Shoresman wrote in a statement to New Times. “Individuals do not need to provide proof of those conditions.” ∆