July 01, 2020
comment
A group of about 25 people gathered outside of Kohl’s in Santa Maria on June 30 to protest U.S. Immigration and Customs Enforcement (ICE). A Facebook post promoting the event said the protest aimed “to proclaim the injustices that are happening to children, mothers, and fathers across the country and in our own community.” 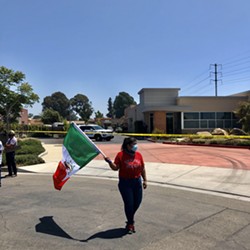 Organized by Santa Maria residents Andrea Uvias and Ivan Lopez Ruiz, the protesters marched from the Kohl’s parking lot to the Santa Maria ICE office, about a mile and a half away.

“I grew up with my mom coming here illegally and fighting to get citizenship, and working her way to become a U.S. citizen,” Ruiz said. “Now she has a cleaning service and cleans houses for basketball players. I did this for my mom and all those kids like me who maybe aren’t as lucky to have parents who get to work and get citizenship, or have to get that call that maybe their parents didn’t make it home that day. That’s why I’m doing it.”

Ruiz said there are intersections between issues affecting the Latino community and the goals of the Black Lives Matter movement.

“A lot of my friends have children who are Afro-Latino or Afro-Latina,” he said. “I think it’s important that we show people that we stick together, so that the people who hate us or despise us are the minority.”

As the march arrived at the ICE office, yellow police tape blocked off the entrance. Two police cars flanked the entrance, and multiple officers stood behind the yellow tape. The protest and the police didn’t interact.

Ruiz addressed the crowd with a megaphone, instructing protesters to stay peaceful and not react to the police presence.

“They’re already under the impression that that’s what we’re here to do, so we need to work extra hard to prove them wrong,” Ruiz said, before asking the march to take a knee and a moment of silence “for George Floyd and also the 1,500 children who were lost.”

George Floyd died on May 25 after Minneapolis police officers kneeled on his neck and back for nearly 9 minutes. The lost children that Ruiz mentioned refer to reports that the Trump administration lost track of 1,500 detained migrant children in 2018.

“I feel like Trump has inspired so much hate in people’s eyes and people’s hearts,” said one protester who asked to remain anonymous. “When they hear ‘immigrant,’ they hear all these racist things that Trump has said, when in reality, it’s not true.”

As the crowd dispersed, Uvias and Ruiz said they plan to keep organizing around the cause, potentially with more protests in the future. ∆