July 02, 2020
comment
Residents looking to visit a Santa Barbara County beach over the July 4 weekend will have to make a change of plans.

On July 2, county Health Officer Henning Ansorg issued a health order that closed all public beaches in the county from July 3 through 5, except for people who are accessing the ocean for water sports or other physical activities. This means no sunbathing, sight-seeing, picnicking, or other sedentary activities, the order states. 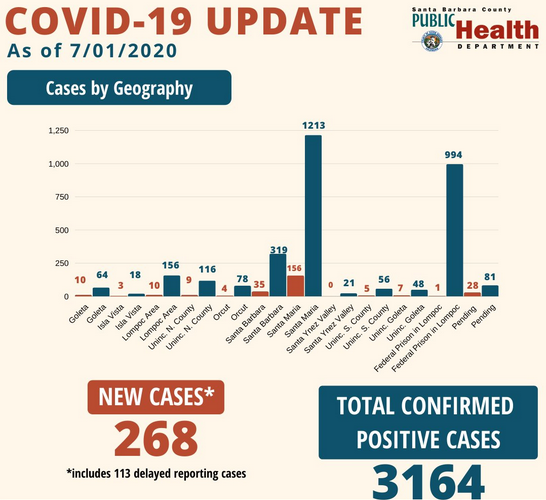 In a press release announcing the order, Ansorg said this temporary closure is necessary to limit the spread of COVID-19, especially after nearby counties, like Los Angeles and Ventura, announced their own beach closures.

“The temporary closure of all beaches is necessary due to the anticipated high volume of people at our beaches during July 4 weekend, which will impede the practice of safe and necessary social distancing to slow the spread of COVID-19 in Santa Barbara County,” Ansorg said.

The beach closures cap off an eventful week of other COVID-related changes in the county.

The state’s watch list consists of 19 counties that are failing to meet specific metrics aimed at measuring the spread of COVID-19. Santa Barbara has been on this list for more than two weeks straight due to increases of confirmed cases in the county.

On July 1, the county reported 268 new cases of the virus, which is the highest single jump reported so far. When announcing the new case counts on Twitter, the department stated that its data team is navigating a new reporting platform, which is why the county hadn't updated its numbers since June 28.

The county updated the numbers on July 2, announcing 111 new cases. This brings the county's total cases to 3,261 with 374 active cases, 64 in the hospital, and 29 people who have died from the virus.

During his press conference, Newsom said case number increases aren’t simply due to more testing. Instead, he said, the state’s positivity rate, or the percentage of people who test positive out of everybody who is tested, is rising, meaning the virus is spreading faster. He said that for weeks the state’s positivity rate remained close to 4.4 percent, but has increased to about 6.4 percent in the last seven days.

“California is seeing the virus spreading at alarming rates in many parts of the state, and we are taking immediate action to slow the spread of the virus in those areas,” Newsom said in a press release.

Newsom also encouraged local governments to cancel any July 4 celebrations or fireworks, which many cities—like Santa Maria and Lompoc—have already done, and urged residents to not gather with people outside of their household over the holiday weekend. ∆

Editor's note: This article was updated at 7 p.m. on July 2 to reflect the most current COVID-19 case numbers for Santa Barbara County.