Carbajal announces legislation to halt the establishment of a denaturalization office

July 20, 2020
1 comment
U.S. Rep. Salud Carbajal (D-Santa Barbara) introduced a new bill on July 20 that aims to block the formation of a denaturalization office within the U.S. Department of Justice. 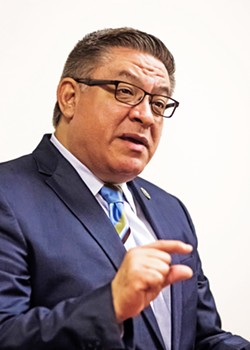 Called the Defend New Americans Act, the bill is in response to the Department of Justice’s February announcement that “it had created an official section in its immigration office dedicated to denaturalization and requested over $200 million to investigate cases,” a press release from Carbajal’s office states.

Carbajal talked about how the new bill would counter those February measures, in an emailed statement.

“The Defend New Americans Act blocks the justice department from using federal funds to implement, administer, or enforce the Trump administration’s policy directive establishing this new section,” Carbajal explained. “Essentially, the bill will make sure no federal dollars are directed to the new denaturalization office.”

“Neither the White House nor the Department of Justice have given any reason for the sudden uptick in referrals and there is no evidence of a corresponding increase in the number of fraudulent citizenship claims,” he wrote. “It’s hard to see this as anything other than an attack on the rights of U.S. citizens simply because they weren’t born here.”

As a naturalized citizen himself, the issue hits close to home for Carbajal.

“Like millions of other Americans who took the Oath of Allegiance, I am proud to be a naturalized citizen, and I refuse to let new Americans be treated as second-class citizens,” he said in a press release.

In his email, Carbajal added that, “Left unchecked, I fear the administration could try to retroactively void citizenship for naturalized Americans who have lived here for decades or even generations.”

Carbajal, Espaillat, and Torres also co-signed a letter sent in March asking members of the Appropriations Subcommittee on Commerce, Justice, Science and Related Agencies to add language to the 2021 fiscal year appropriations legislation that would restrict the creation of the official denaturalization office. The appropriations package is not yet finalized. ∆