July 23, 2020
comment
Cal Poly shattered its goal of fundraising $700 million by 2021, announcing on July 22 that it’d raised $832 million in what the school said was the largest capital campaign in university, and CSU, history. 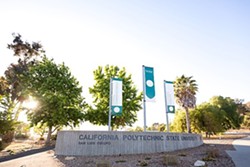 The campaign—called The Power of Doing: The Campaign for Learn by Doing—drew nearly 75,000 donors over nearly a decade, with $156 million raised in 2020, the most successful year of the fundraiser, according to a press release.

Cal Poly met its $700 million target a year earlier than it’d planned; the July 22 press release announced the end of the fundraiser.

Close to half of all of the donations were bequest commitments, which Cal Poly said “will support our students far into the future.”

The campaign funds will support scholarship opportunities, instructional and lab equipment, research stipends, diversity and inclusion efforts, and the construction of new academic and athletic facilities.

Donations have already gone toward building a new beach volleyball complex and a wine and viticulture center on campus. Another beneficiary is the Cal Poly Scholars Program, which recruits and provides financial support to “high-achieving, low-income students” at California high schools. Nearly $145 million is going into scholarship funds.

“It is hard to overstate the impact this will have on the future of Cal Poly and our students,” Cal Poly President Jeff Armstrong said in a statement.