“The Lompoc Unified School District is committed to the health and safety of our students, staff, and community,” Valla wrote. “Under the guidance of the governor of the state of California, the superintendent of schools for Santa Barbara County, and the Santa Barbara County Public Health Department, it has been determined that Lompoc Unified Schools will begin the 2020-2021 school year 100 percent remotely.” 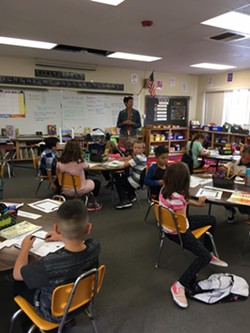 In a series of Facebook posts, the district also released daily schedules for distance learning. In the posts’ comment sections, teachers, parents, and guardians expressed strong sentiments over the district’s decision.

“How is the school district gonna allow for students who have terrible Internet access as Internet access in certain rural parts of the district is quite poor and satellite only,” wrote Facebook user Elham Novin-Baheran.

On another post, Facebook user Laura Lilly Vance wrote, “I’ve been a teacher for 8 years. This is ridiculous. You want my kids to sit in front of a screen for most of the day. That’s not even healthy. We are withdrawing and doing our own homeschooling program.”

Schedules for elementary school children in grades K-6 look slightly different for every grade level, but in general, all grades will have to report to morning attendance via Zoom at 8 a.m. each morning. The kindergarten schedule goes until 2 p.m. each day, while grades 1-6 go until 3 p.m. All grade levels will have required Zoom instruction for around half of each day. Exact schedules can be found here.

Facebook user Farin Gray wrote, “I'm a stay at home parent and this is stressing me out. … I am so sorry for all those parents needing to work. This schedule is an unrealistic burdon to so many but I feel most for you all.”

Middle and high school students’ schedules include four hours of Zoom instruction on most days and can be found here.

Before the pandemic, students at Lompoc High School, Vandenberg Middle School, Lompoc Valley Middle School, and Cabrillo High School all had seven periods a day. Now, students will instead take four periods this fall and four in the second semester, for a total of eight periods, according to the LUSD Action Plan.

Danielle Riggs, parent of a Vandenberg Middle School student, is particularly concerned about this aspect of the plan and how it’s being communicated. She wrote an email to the district’s Board of Supervisors on July 30, on which the Sun was copied.

“You have made a decision to fundamentally alter the way in which the students would be learning this year and have yet to communicate this information to the parents in any sort of reasonable, honest, and transparent fashion,” Riggs wrote.

She continued that, “a change such as this warrants a separate letter at least, extensive public meetings with parents who for all intents and purposes will be left to deal with these decisions.”

Riggs told the Sun on July 31 that she heard back from a couple of the board members, one of whom told her that the board has yet to approve the final schedule, and will be doing so at their Aug. 11 board meeting. ∆
Prev
Next