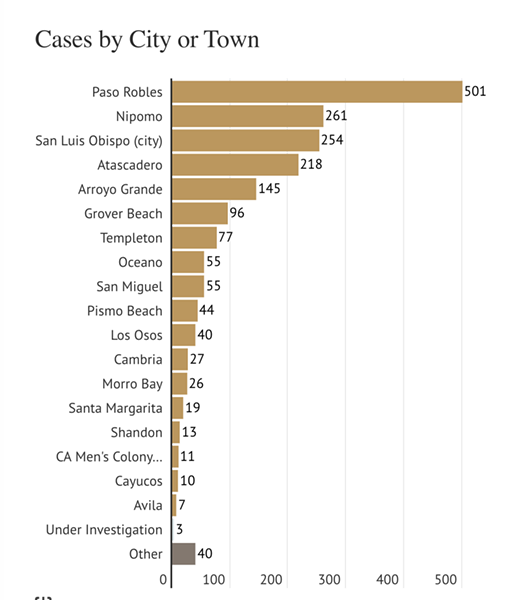 He stated there are 159 active known cases within the city limits at 128 different locations. Frutchey said the locations are scattered fairly evenly throughout the city.

According to SLO County Public Health officials, 27 percent of the county’s cases have been transmitted from person-to-person and 22 percent through community spread. Frutchey explained person-to-person as within a household or office setting, while community transmission comes as a result of people being out and about.

“That is not a good sign: if we would just observe physical distancing, limit mixing with those outside of our household and wear masks, the community transmission numbers could be cut dramatically,” he said in the letter.

Frutchey said that in June, the city had roughly 13 percent of the total new cases within SLO County, while in July it had 26 percent. On July 30, the area’s zip code had 14 of the county’s 30 new cases, almost half.

“Clearly our community is moving in the wrong direction, and doing so fairly rapidly. The slope of Paso’s curve … has taken a significant departure from the case curves of other cities in our county,” he said. “If we are deluding ourselves into thinking things can’t get even worse, we are sorely mistaken.”

The letter notes that the Kern County, a neighboring county with residents who frequently visit Paso Robles, has one of the highest infection rates in the state—it has reported more than 11,000 new cases in the past 14 days. He said Kern is averaging more than 700 new cases a day and their infection rate is doubling every 12 days.

Frutchey says he was at a Paso car dealership on July 30, and no one was wearing a mask or observing physical distancing.

“If we don’t change our individual behavior, we are each much more likely to catch the virus than we were before,” he said in the letter.

Paso Mayor Steve Martin told New Times that this is a time for the community to realize that Paso Robles has led the county in infections since the beginning of the pandemic.

“Initially there was an explanation given, it was an extended family, but the fact of the matter is we continue to lead the county and that seems to be indicative to me of lack of infection control measures,” he said.

It’s important, Martin said, that everyone complies with the universal infection controls of washing your hands, wearing face masks, and physical distancing.

In the mayor’s recent blog post, he compares wearing a mask to the Smokey the Bear campaign and slogan, “Only you can prevent forest fires.”

In his blog Martin states, “When it comes to COVID-19, we are all potential burning matches. We may have the virus and not know it. That doesn’t mean we’re not setting fires wherever we go without a mask. But, ‘maybe masks don’t work,’ you say. Well, maybe every burning match doesn’t start a forest fire. That doesn’t mean you should keep tossing them into the grass.”

Setting politics and scientific theories about masks aside, Martin said, it won’t hurt anyone to wear one.

“What we need in our community right now is a level of confidence that we are taking care of each other and doing everything we can to defeat the virus rather than seeing people walk around without masks and wonder if I am being infected even though I’m following the rules,” he said.

If the community can practice those universal infection control rules, Martin said, there is a greater likelihood that the area will see a significant reduction in infections, and the continued viability of the community’s businesses and jobs can continue.