August 13, 2020
comment
A nonprofit that advocates for off-roading access in the Oceano Dunes State Vehicular Recreation Area (SVRA) is taking to court to dispute the California Coastal Commission's July 7 closure of the park to vehicles. 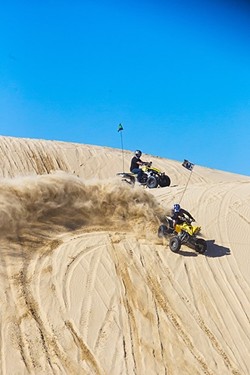 The Friends of Oceano Dunes filed a civil lawsuit against the Coastal Commission, its executive director, and State Parks in SLO County Superior Court on July 28, challenging, among other things, a recently issued cease and desist order that effectively closed the Oceano Dunes to vehicles until Oct. 1.

The Oceano Dunes SVRA has been closed to vehicles since March 26 due to COVID-19. Without vehicles in the area, snowy plovers started building nests outside their "seasonal exclosures"—designated breeding areas that are off limits to vehicles and visitors.

In early June, local conservationists complained that State Parks employees were attempting to prevent plovers from nesting in areas that are typically open for vehicle use in preparation for the park’s potential reopening.
In a consensual cease and desist order that was finalized on July 7, State Parks agreed to halt a number of those nesting prevention activities, which the Coastal Commission deemed unpermitted and possibly harmful to snowy plovers.

In the order, State Parks agreed to stop grading and grooming the beach, and stop using mylar flags, posts, herding, and other efforts used to deter plovers from nesting outside their designated breeding areas. The order also prohibits camping and vehicle use south of Mile Post 3 through the end of snowy plover nesting season on Oct. 1, leaving only about a mile of the dunes that could possibly be opened to the public.

“Ainsworth took this action purportedly to protect a sensitive bird species, the western snowy plover;” the complaint reads, “however, less draconian measures than closing the entire SVRA have been approved by federal and state wildlife agencies for decades and have been used successfully to protect the bird.”