August 14, 2020
comment
Phillips 66, which operates a major Santa Maria oil pipeline as well as the Santa Maria oil refinery on the Nipomo Mesa, announced on Aug. 12 that it plans to shut down the refining facility starting in 2023.

The announcement comes exactly one week after the Santa Barbara Planning Commission voted to approve a one-year extension on TerraCore’s proposed Foxen pipeline, a 2.9-mile pipeline that would connect the Cat Canyon oil field to the existing Santa Maria Phillips 66 pipeline. The proposal would replace the current practice of trucking crude oil from Cat Canyon. 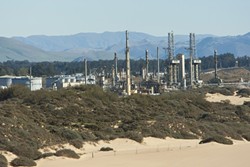 Without the Phillips 66 pipeline to connect to as proposed, it’s unclear what the Foxen project’s future holds.

“In association with the planned closure of the Santa Maria refining facility, our crude oil pipelines located in Santa Barbara County will be taken out of service in 2023 while we consider potential alternate uses for them,” Phillips 66 representative Joe Gannon said via email.

TerraCore didn’t respond to a request for comment before press time.

The other question that looms with the announcement is what will happen to those employed at the Santa Maria refinery, which according to Phillips 66’s website has 140 full-time employees. While Phillips 66 announced plans to transition the company’s San Francisco refinery into a renewable fuel plant, it is unclear whether the company’s Santa Maria’s refinery will see the same outcome.

When asked if Phillips 66 had any concrete plans to supplement the loss of Santa Maria refinery jobs with something similar to its plans for San Francisco, Gannon’s answer referred to the state’s energy market.

“California market conditions support an energy transition to renewable fuel production,” Gannon wrote. “The current configuration of the refinery is not economically viable to continue its production of traditional fossil fuel products.”

ExxonMobil could also be affected by the decision to close the Santa Maria refinery.

The company’s Santa Ynez Unit consists of three offshore oil drilling platforms, which have been out of operation since the May 2015 Refugio oil spill. ExxonMobil hopes to resume operations with a proposal to temporarily transport oil using tanker trucks.

According to Santa Barbara County’s recently released environmental impact report on the proposed project, the trucks would take crude oil from the company’s Las Flores Canyon facility and then deliver to either the Phillips 66 Santa Maria Pump Station or the Plains Pentland Terminal in Kern County.

“We are evaluating how [the Phillips 66 refinery closure] may affect our application for temporary trucking,” ExxonMobil spokesperson Julie King said in an emailed statement. ∆