August 14, 2020
comment
In late June, after Santa Maria city staff discovered three dead city trees that had been drilled into and injected with chemicals, the city started its manhunt for the tree killer or killers.

Now the city says it’s found the culprit. Well, one culprit. Who admitted to killing just one of the three dead trees. 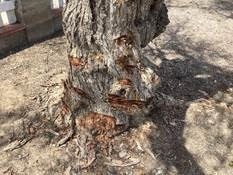 On June 22, the city of Santa Maria’s park and urban forest supervisor discovered two trees on West Main Street that appeared to have suspiciously died, prompting the city to investigate further. The city arborist discovered that the trees had multiple drill holes near the base, indicating that they were likely injected with chemicals. A few days later, a third tree on West Taft Street was discovered with the same apparent injections.

Although pathology tests were unable to determine the substance used to kill the trees—a 20-foot-tall London plane, a 15-foot-tall icee blue yellowwood tree, and a Brazilian pepper tree—the city says it’s believed to be the result of chemical injury. There wasn’t enough live tissue remaining to perform a successful analysis of chemical presence, according to the city’s contracted certified arborist.

On Aug. 13, the city announced that a local man had confessed to killing one of the three trees in question. The man, according to a city press release, said he didn’t know the tree was city property or that its removal required a permit. He paid $425 for a city permit that covers the cost of planting two replacement trees, which will be planted either at a vacant space or a park.

Brett Fulgoni, assistant director of Recreation and Parks, said in a previous interview that, under the city’s tree ordinance, a person charged with killing the trees would be required as punishment to pay for the damages and the costs associated with planting a new tree. The estimated damages to these three trees amount to $7,900.

Those responsible for the other dead trees have not yet been located, but the city says the investigation is ongoing. ∆