August 21, 2020
comment
For nearly 100 years, activists and reformers fought to win the right to vote for women in the United States.

On Aug. 18, 1920, the women’s suffrage movement finally won, and the 19th Amendment to the Constitution was ratified, declaring for the first time that some women had equal rights, including the right to vote. 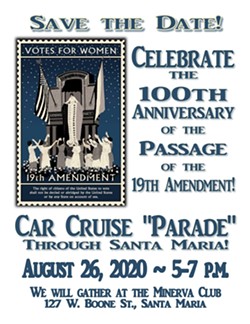 The route starts at the Minerva Club and will circulate through Santa Maria City Council Districts 1 and 2. Everyone is encouraged to join the cruise, wear all white or period clothing, and decorate their cars in purple and gold.

Participants will park their decorated cars at the Minerva Club, 127 W. Boone St., at 5 p.m., where there will be brief remarks concerning the suffrage struggle  and the importance of female voters. Speakers include Cynthia Thacker, whose family has a long history in Santa Maria; Hilda Zacarias, a former Santa Maria City Council member and current Allan Hancock College board member; and Ivette Peralta, a member of the Santa Barbara County Commission for Women.

The centennial collaborative came together a year ago to plan a celebration at the Minerva Club, and while the event isn’t exactly what they envisioned due to COVID-19, American Association of University Women member Laura Selken said the group is happy to be able to celebrate.

“We want to celebrate the ratification and the decades-long work it took to get to this and re-emphasize the importance of voting even more so now. So many things are being implemented to dampen the ability for people to vote, and we are wanting to bring that to people’s attention,” Selken said.

The group is working to raise awareness in the community-at-large that it’s important to vote, every vote counts, and women need to take a step forward to vote and run for office. Selken said the event’s speakers will focus on the suffrage movement’s past, the present state of equality, and the future.

“In 100 years, in some ways we’ve come a long way and in other ways we haven’t come very far at all,” she said. “All our organizations are proactive in the community and doing actions in the community to benefit the community and voting is one of the key ways to doing that. With so much going on politically speaking, locally and nationally, we wanted to have it focused on voting and the census.”

Attendees are asked to arrive with cars completely decorated if they wish to decorate their cars, as they are required to remain in their vehicles. If attendees need to step out of their cars, the group asks that they wear face coverings and follow social distancing guidelines. ∆