August 24, 2020
comment
It’s been 40 years since Guadalupe last touched its sign ordinance, but the city hopes to soon change that. A workshop will be held at 5 p.m. on Aug. 25 at Guadalupe’s City Council Chambers to gather public and city council feedback on a new draft sign ordinance.

The current ordinance, part of the city’s original zoning ordinance adopted in 1980, consists of three short paragraphs, is difficult to interpret, and contains no definitions or rules for what types of signs are allowed in the city, Guadalupe City Planning Director Larry Appel told the Sun. 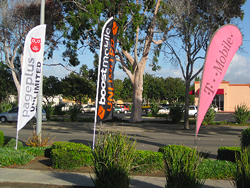 “We get questions from people about signs like, ‘Where does it say that in the ordinance?’” Appel said. “We really didn’t have anything other than those three paragraphs, so it really was time to fix that.”

The new draft ordinance includes an extensive list of definitions for different types of signs, identifies which signs are permitted or not allowed, and streamlines the process for sign approval.

“In Santa Maria, when I was the director there, we prohibited [bow-feather signs],” Appel said. “We did it for a one-year trial, and when it came back, the city council said, ‘We want to do this permanently.’”

Signs that the ordinance proposes to prohibit include bow-feather signs, pole signs, and sandwich board signs. The ordinance includes pictures to illustrate the different types.

“There’s only a few [bow-feather signs] up in Guadalupe right now,” Appel said. “But I always say, ‘Don’t think about just an individual flag or sign.’ Think about if every business decided they wanted to do something like that, and they wanted two or three. It starts to really make an area look cluttered.”

Businesses that suddenly find themselves with nonconforming signs—signs that were previously allowed but subsequently become prohibited under a new ordinance—would have a maximum of two years to stop using the sign, with the exact amount of time determined by City Council. This part of the draft ordinance is known as a sunset clause.

“We’re going to try to eliminate pole signs, but give people an opportunity to have a couple of remaining years to decide if they want to stay in business, if they want to start saving up for a new sign,” Appel explained. “We don’t want to just hit them with this ordinance.”

The city is also working with a consultant who is helping keep business owners in the loop about the proposed ordinance and encourage them to participate in the workshop process.

The proposal would streamline the sign approval process by taking away the need for a conditional use permit (CUP) from City Council. CUPs require that discretionary projects be approved by someone other than staff, adding an extra roadblock to getting a sign approved.

“We don’t have a planning commission in Guadalupe, so anything that requires a CUP has to be approved by City Council,” Appel explained.

The proposed ordinance would allow most signs to be approved at the staff level.

“The whole idea is trying to bring Guadalupe into the 21st century from a planning standpoint,” Appel said. “We’re trying to plan for the future and make sure that, as new businesses come in, that we can have a good ordinance in place that makes it really clear to people what the rules and regulations are going to be.” ∆