September 01, 2020
1 comment
In a marathon end to the 2020 California legislative session, state lawmakers passed a flurry of bills responding to the COVID-19 pandemic and ongoing protests against police brutality and racism—while it let other bills die without a vote.

Deliberating up until a midnight deadline on Sept. 1, the Legislature acted to extend eviction protections for renters impacted by COVID-19; ban police chokeholds and neck restraints; require that employers inform their employees about COVID-19 outbreaks in the workplace; and exempt some workers from last year’s controversial independent contractor law—among others that now await Gov. Gavin’s Newsom signature.

Newsom signed a few bills right away—including the eviction measure and a ban on flavored tobacco—and he has until Sept. 30 to consider the rest.

Assembly Bill 3088 delays all evictions in the state due to unpaid rent until February 2021. The law requires tenants to pay at least 25 percent of their future rent between September and February to avoid getting evicted, and it does not forgive any past rent owed since March. Starting in March 2021, landlords can start pursuing unpaid rent in small claims court. 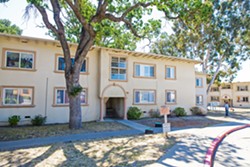 While both tenant and landlord groups opposed parts of the bill, the compromise passed the Legislature easily. San Luis Obispo Mayor Heidi Harmon expressed her gratitude for the measure in a Sept. 1 Instagram post.

“So grateful for this,” Harmon wrote. “The city of SLO has over 62 percent renters, and people need this type of support during this historically challenging time.”

Other bills in the mix did not make it out of the legislative session. Senate Bill 977, introduced by local Sen. Bill Monning (D-Carmel), which would’ve strengthened the state’s oversight of hospital mergers, did not make it off the Assembly floor. The bill came in response to data showing that unchecked hospital consolidation is driving up medical costs.