At a Sept. 8 press conference, Public Health Director Dr. Van Do-Reynoso reported that 44 people are hospitalized due to the virus with 17 in the ICU. That’s nearly half the number of people hospitalized with coronavirus exactly one month ago, when 82 people were hospitalized and 27 were in the ICU. 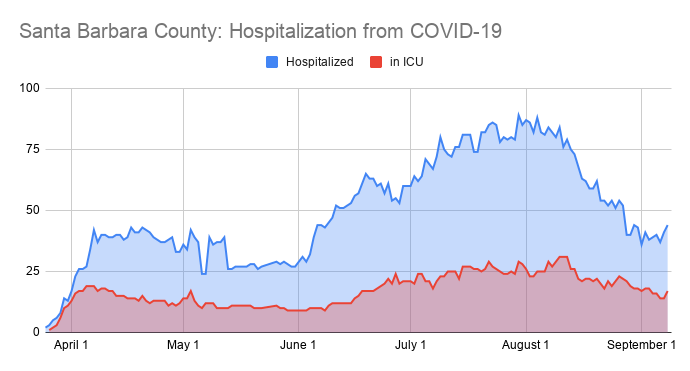 Dr. Lynn Fitzgibbons, Cottage Health’s infectious disease specialist, was also at the Sept. 8 press conference. She said that the number of patients hospitalized is one of the most accurate metrics for analyzing the community’s condition during the pandemic.

“We really like to think that they’re not affected by things like how many people are getting tested,” Fitzgibbons said.

While a metric like percent positivity is largely dependent on how many people are getting tested, hospitalization is different in that people who are sick enough to be hospitalized probably will be, regardless of testing availability or how many people choose to get tested.

But, Fitzgibbons added, the downside of hospitalization metrics is that they lag behind the actual time that a person was infected. This means that the downward trend we see today may not reflect the actual number of people who will become infected today— especially after the holiday weekend.

“When I see numbers going down at Cottage and around our county, I’m thrilled to know that our community’s strong actions led to this downturn,” Fitzgibbons said. “But the actions that lead to my patient being discharged today, tomorrow, or perhaps Thursday—that case was a result of a transmission event that occurred perhaps two to four weeks ago. In the wake of an incredibly hot and difficult Labor Day, I’m hopeful that our community’s good practices held strong.”

And while hospitalization rates used to be one of the metrics that determined whether a county remained on the state’s watch list, the governor’s new Blueprint for a Safer Economy now only considers adjusted case rate and testing positivity.

That means that the county’s encouraging hospitalization trends won’t help much for moving into a lower risk tier in the state’s eyes. The county needs its positivity and case rates to trend in the same direction as its hospitalization rates.

The Blueprint for a Safer Economy delineates four color-coded tiers of community disease transmission. Right now, Santa Barbara County is in the purple, or “widespread,” tier, which is the highest risk tier that a county can be in. As a county’s COVID-19 numbers improve, it can move up into the red, orange, and yellow tiers, with yellow being the lowest risk of community transmission. As counties move through the tier system, more sectors are allowed to reopen, such as schools.

The county’s percent positivity rate is already in the red tier. This metric has to be between 5 and 8 percent, and was at 5.5 percent as of Sept. 8.

But the county’s adjusted case rate continues to hold it back. Do-Reynoso reported that the county was at 8.3 percent for this metric on Sept. 8. The county needs to be below 7 percent.

Furthermore, Do-Reynoso explained, the county’s overall tier color assignment is determined by the more restrictive tier. This means that even though the county’s positivity rate is doing well, if the adjusted case rate doesn’t fall below 7 percent, the county will remain in the highest risk tier.

As long as the county stays in the purple, schools can’t reopen, unless they receive a waiver. Once a county moves out of the purple tier (also called tier 1) for 14 consecutive days, then schools can reopen.

The state’s Blueprint for a Safer Economy web page explains that this is “similar to being off the County Data Monitoring List for at least 14 days.” The Blueprint is the replacement to the state’s monitoring list. ∆