Carbajal leads forum to discuss local agriculture during pandemic and beyond

Carbajal said that CFAP will give a total of $16 billion in direct payments to growers across the nation who experienced price or crop losses due to COVID-19. There are a number of crops grown on the Central Coast that were initially ineligible, he added, but the list of eligible specialty crops has since expanded. 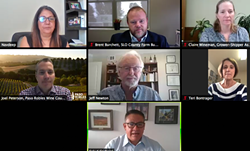 During the forum, Claire Wineman, president of the Grower-Shipper Association of Santa Barbara and San Luis Obispo Counties, said that local farmers have felt the tangible results of these efforts.

“The expansion of the eligible crops was very, very helpful, especially for some of the specialty crops, nursery, and cut flowers,” she said. “It really provided a lifeline for some of our members who are small and very specialized. Kale is the dramatic example that really made a difference for some of my members.”

Navdeep Dhillon, the farm program chief for USDA-Farm Service Agency in California, spoke during the forum, saying that the majority of assistance program applications from SLO and Santa Barbara counties are coming from farmers growing specialty crops. There are three categories of specialty crops a grower could fall under to be eligible for CFAP relief: If their production was subject to price fluctuation; if a crop was delivered to a processor, marketer, or buyer but the grower wasn’t paid; and finally, if a grower was unable to harvest or deliver their crops due to lack of labor or a canceled contract.

The incident must have occurred between Jan. 15 and April 15, 2020, to be eligible. Dhillon said that the official application deadline was the day of the forum, Sept. 11, but late filed applications are being accepted. Farmers can apply through their local farm service agencies, which can be found through USDA’s online locator.

While local farm industry representatives like Wineman said that the program has positively impacted many local growers, they also spoke about some of the ways it could be improved.

Wineman said that, as is often the case with federal relief programs, there’s “a challenge sometimes with the maximum federal program payments, given the high cost of doing business in California.”

“We definitely had members whose losses were well beyond the maximum program payments,” she said.

Wineman added that making relief available for farmers who experienced hardship events after April 15 would be helpful. For some farmers, hardships extend beyond coronavirus impacts.

“There has been a net zero migration since 2008,” he said during the forum.

He added that, in addition to the H-2A program, he’d like to see a “more comprehensive national guest worker program.”

“If we don’t move in that direction, not only in vineyards but in veg crops and others, we will begin to lose agriculture in California,” he said. “It’s a huge economic issue for the state of California.”

Carbajal said that, as a cosponsor of the Farm Workforce Modernization Act, he supports providing pathways for farmworkers and their families to legally stay in the country and continue to work in agriculture, as well as smoothing out bureaucratic challenges that exist within the H-2A program.

“The only problem is that it hasn’t moved forward in the Senate, and as a result we don’t have a bill to be able to move forward to the administration,” Carbajal said. “We have a climate that hasn’t lent itself to being more embracing of moving forward with comprehensive immigration reform.” ∆