September 14, 2020
1 comment
Throughout the United States, Sept. 11 is a day for many to reflect, celebrate a lost loved one, and honor first responders.

In congruence with the country-wide sentiment, the North County Tea Party hosted a Commemorate 9/11 Rally: Giving a Voice to the Silent Majority on September 11 at the Faces of Freedom Memorial Park in Atascadero. The theme of the event was unifying America. The event’s flyer asked attendees to bring their own chairs and wear face coverings. 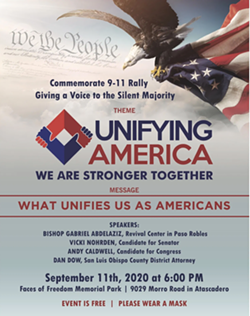 Although none of the speakers specified who the silent majority receiving a voice was, Nohrden called for a continued commitment to “protecting the freedoms” of the United States.

During Caldwell’s speech, he stated that the day was dedicated to honoring those who sacrificed their lives—policeman, firefighters, and those aboard the airlines—to protect the country’s freedom. He also spoke about his father, a survivor of the Bataan Death March. In April 1942, the Imperial Japanese Army forced 60,000 to 80,000 American and Filipino prisoners of war captured during World War II on the Bataan Peninsula to march 85 miles to a prison camp.

Dow gave the audience a timeline of Sept. 11, 2001, followed by a reflection on this year.

“We remember that unity, but today we’re in a very different place. And I’m afraid that as a country and as a society we have focused so much on the differences that we have, we’ve lost sight of how much we have in common and how much we believe in the same,” Dow said.

To end his speech Dow requested those in attendance—whatever their political leaning— commit to never taking their liberty for granted.

“I love this country, and it was not given to us freely. It was given to us at a great cost, and because of that, it’s our responsibility to cherish it, protect it, nourish it, and then hand it over to our children and our grandchildren so that they can hand it to theirs,” he said.

The only way to do this, Dow said, is for people to promote the values of “liberty that that country was founded on.” ∆