September 21, 2020
2 comments
Local activist and protest leader Tianna Arata appeared in a second virtual San Luis Obispo County court hearing on Sept. 17 and for the second time entered no plea for the 13 misdemeanor charges filed against her.

Arata’s defense attorneys Patrick Fisher and Curtis Briggs asked to continue the arraignment to allow them time to file a demurrer and challenge Arata’s charges on First Amendment grounds. 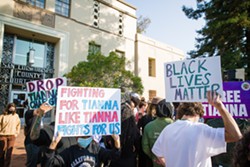 During the hearing, Briggs said the charges filed against their client were “unconstitutional and most did not add up to a crime.”

A demurrer is a written response that pleads for dismissal on the point that even if the facts alleged in the complaint were true, there isn’t a legal basis for a case. Some demurrers contend that the complaint is unclear or omits an essential element of fact. A hearing before a judge will be held to determine whether the demurrer is valid.

Arata was arrested hours after a July 21 protest in which she and other protesters marched onto Highway 101 and blocked traffic. Protesters had two incidents with vehicles—one occurred on the highway and is under investigation by the California Highway Patrol.

Arata was released in the early morning following her arrest. The San Luis Obispo Police Department recommended she be charged with five felonies and three misdemeanors, however SLO County District Attorney Dan Dow is charging her with 13 misdemeanors.

The misdemeanors included unlawful assembly, disturbing the peace, six counts of obstruction of a thoroughfare, and five counts of false imprisonment.