State bans sale of dogs, cats, and rabbits in stores

Just a day before “Puppy Mill Awareness Day” on Sept. 19, Gov. Gavin Newsom signed a bill effectively banning the retail sale of dogs, cats, and rabbits in California pet stores. Under the new restrictions laid out in Assembly Bill 2152, pet stores will be able to partner with animal shelters and rescue organizations to hold adoption events, but will not be allowed to accept any compensation for the adoptions.

“In California, we are putting an end to the cruel puppy mill industry for good,” Newsom said in a Sept. 18 press release. “I am proud to sign this legislation to advance California’s nation-leading animal welfare protections and help more pets join loving families.” 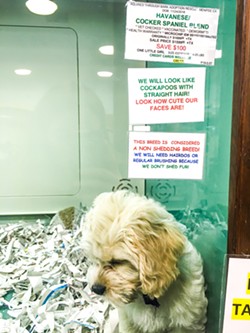 AB 2152 is part of a long-running effort to reduce demand for animals that are irresponsibly bred in poor conditions and large numbers—often referred to as “puppy mills”—while increasing demand for the millions of already available shelter animals that are often killed if not adopted. The new bill builds upon an existing law that went into effect in 2019 and requires pet retailers to obtain dogs, cats, and rabbits from animal shelters or rescue groups, and prohibits stores from sourcing directly from breeders.

Although animal rights activists considered that law a step in the right direction, many say it didn’t go far enough, and pet stores across the state—including now-closed local pet store Animal Kingdom—were accused of buying animals from mass breeders disguised as shelters.

In San Diego, stores that listed Bark Adoptions as a sourcing shelter were fined hundreds of dollars per pet after an investigation concluded that the "shelter" had not received nonprofit status and was likely a front for mass breeders hoping to get their animals into stores. San Luis Obispo County Animal Services found similar issues with the dogs from Bark Adoptions available at Animal Kingdom but Animal Services Manager Eric Anderson said in a 2019 interview with New Times that the store was able to provide the county with proof that Bark Adoptions had received 501(c)(3) tax exemption status.

Neil Trent is currently the CEO of Woods Humane Society, but before that he worked alongside animal control departments in Southern California when the initial pet stores law went into effect at the beginning of 2019. Trent said he helped conduct raids on a number of pet stores that were “clearly” selling puppies from puppy mills that had gained nonprofit status to pose as shelter and rescue operations.

He’s not sure how the new law will impact Woods—which takes in about 3,000 animals per year, usually from other shelters and animal control operations with lacking capacity—but he’s glad the state is cracking down.

“We were very pleased to see that the governor has moved forward to try to shut this loophole down,” Trent told New Times. ∆
Prev
Next