At a meeting on Oct. 6, Pismo Beach City Council voted 4-1 to introduce changes to the city’s ordinances regarding ADUs, which, if passed, would bring Pismo into compliance with state law. 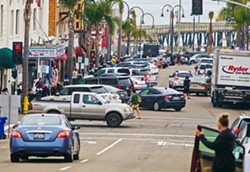 “In fact, in speaking with the various staff from HCD [California Department of Housing and Community Development],” Winklepleck said, “our current ordinance is null and void.”

The state now requires that ADUs and junior ADUs be considered through a ministerial process—eliminating the need for public hearings—and that applications are either approved or denied within 60 days. The city can’t require property owners to live in their ADUs or primary structures until 2025, and ADUs can’t be used as short-term rentals, although Planning Manager Matt Downing said any existing ADUs used as short-term rentals would be grandfathered in.

The state no longer requires designated ADU parking spaces in a number of circumstances, which Downing said has the potential to cause further congestion in a town plagued by a lack of street parking for both visitors and residents.

So city staff are proposing that Pismo require one parking space per bedroom, up to a max of two spaces, for ADUs in the coastal zone. Outside the coastal zone, city staff proposed one space per unit. None would be required for junior ADUs in any zone. But according to state law, Downing said ADUs within a half-mile of a bus stop aren’t required to provide designated parking at all.

“The bad news about that is basically all of our city is located within one half a mile of a bus stop,” he said at the meeting on Oct. 6.

To ensure that visitors can find adequate parking in Pismo and Shell Beach, parking spaces would still be required for ADUs in the coastal zone that are west of Highway 101 and within a quarter-mile of a coastal access point, a segment of a coastal trail, a coastal park, or a coastal view area.

But Councilmember Marcia Guthrie, who voted against the proposed changes, said it’s not necessarily homeowners who are to blame for Pismo’s parking problems. It shouldn’t fall on them to provide adequate parking, she said, when hotels and other commercial developers aren’t doing their part.

“It seems like the onus of responsibility is falling on the homeowner time and time again,” Guthrie told New Times.

While Guthrie said she supports the effort to make it easier for people to build ADUs, she doesn’t like the proposed parking requirements.

“Until the weight of parking is spread out equally among all applicants,” she said at the Oct. 6 meeting, “I don’t think I can support the parking portion of this.” ∆