October 09, 2020
comment
San Luis Obispo has a new interim police chief to fill the shoes of departed Chief Deanna Cantrell, whose four-year tenure in the city ended rockily on Sept. 30. 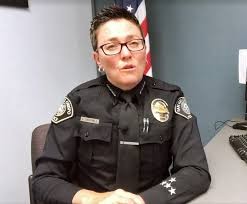 On Oct. 8, SLO City Manager Derek Johnson announced the appointment of longtime department member Jeff Smith to the interim position. Smith will helm the department for roughly four months while the city undergoes a national recruitment for its next police chief.

A captain since 2016 overseeing operations and administration, Smith has served in the SLO Police Department since 2003.

“I have complete confidence in Interim Chief Smith’s abilities to lead the department during these uncertain times,” Johnson said in a statement. “He is a balanced and compassionate leader with breadth and depth of knowledge and commitment to serve [the] community.”

In a statement accepting the position, Smith said, “I am passionate about serving our community and am committed to providing the department with continuity.”

SLO’s search for a new permanent chief comes as the city faces national scrutiny for its handling of recent Black Lives Matter (BLM) protests—including deploying tear gas against protesters on June 1 and arresting BLM leader Tianna Arata on July 21. The department is also under criticism for its 2019 search of a SLO County home, which occurred without a warrant as officers tried to recover then-Chief Cantrell’s gun that she’d left in a restaurant bathroom.

The recruitment is expected to launch in mid- to late-October when the city picks a consulting firm to lead the search efforts. The city said community input will be “essential” to the final selection.

The process, according to SLO, will “engage community stakeholders” and “provide the entire community via an online survey the opportunity to weigh in” by “establishing a description of the ‘ideal candidate.’”

“I look forward to meeting and hearing from the community on the qualities, skills, and characteristics that our community wants in the next police chief,” Johnson said in his statement. ∆