The proposed 140-mile sanctuary, intended to offer protections and management for marine resources between Cambria and Santa Barbara, was in jeopardy after it had not advanced from the nomination phase to the designation phase in five years. 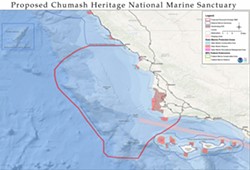 But NOAA’s five-year review of the application concluded that the sanctuary still meets the criteria for nomination. It was renewed to October 2025.

“There are still significant threats to the area; it is still an area of national significance, and there is still broad community support for the nomination remaining on the inventory of possible designations,” NOAA wrote in its Oct. 1 notice in the federal register.

In deciding to renew the nomination, NOAA officials cited “new scientific information” that backed up the “national significance” of the coastline and the threats its resources face.

Local elected officials and indigenous tribal leaders celebrated the news in a press release on Oct. 13.

“I am thankful this five-year extension was granted, and I urge NOAA to move forward with designating this area as a sanctuary to protect it for future generations,” U.S. Rep. Salud Carbajal (D-Santa Barbara) said in a statement. “Marine sanctuaries play an essential role in protecting California’s sensitive marine and coastal areas from further oil and gas development. Designating this unique region on the Central Coast as a National Marine Sanctuary will help preserve our natural environment and cultural heritage while also helping to fight climate change.”

Fred Collins, chair of the Northern Chumash Tribal Council, which was the organization behind the application, said that a sanctuary would make “all things connected, all things dreaming together for the abundant life of Grandmother Ocean—for fishermen and fisherwomen, tourists, and all that dwell on the shining, magical, mysterious, majestic coastline of the Chumash Heritage National Marine Sanctuary.” ∆